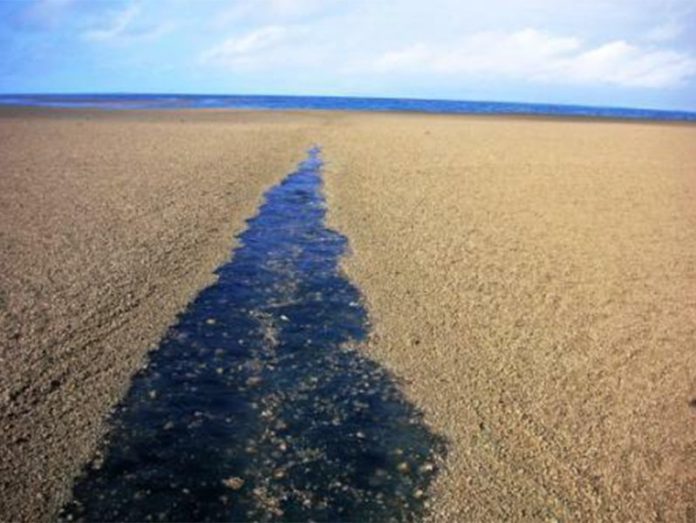 Via The Mind Unleashed

The crew of the Maiken sailed through the South Pacific when they spotted a strange discoloration on the water. They moved in closer to inspect it, but by the time they realized what it was, it was too almost too late to escape alive!

We might not realize it in front of our eyes, but the Earth is still changing all the time! It just happens so slowly that we can’t really perceive it. Every now and then, things speed up… a lot!

The crew of the Maiken was enjoying a leisurely sail through the South Pacific when they spotted a strange discoloration on the water. They moved in closer to inspect it, but by the time they realized what it was, it was too late…

THE CREW OF THE MAIKEN WAS SAILING THE SOUTH PACIFIC WHEN THEY SPOTTED AN UNUSUAL SHADOW. AS THEY GOT CLOSER, WHAT THEY HAD TAKEN TO BE A SANDBAR REVEALED ITSELF TO BE SOMETHING ELSE ENTIRELY. A HUGE AMOUNT OF PUMICE STONE WAS FLOATING TO THE SURFACE OF THE WATER. IT LOOKED LIKE A BEACH. THEY DECIDED TO GET A CLOSER LOOK AND REDIRECTED THEIR YACHT TOWARDS IT. IT LOOKS LIKE A BEACH IN THE MIDDLE OF THE OCEAN! THE CREW DECIDED TO SAIL THROUGH IT, LEAVING A BREAK IN THE STONE BEHIND THEM AS THEY WENT. THEY WONDERED WHAT COULD HAVE CAUSED THIS EXPANSE OF STONE TO SUDDENLY APPEAR. THE FIELD OF PUMICE WAS GETTING EVEN LARGER AS THEY PASSED THROUGH IT. THE CREW HAD AN UNEASY FEELING AND UPPED THEIR SPEED. ONCE THEY WERE A SAFE DISTANCE AWAY, THEY HEARD A FAINT RUMBLING. LOOKING BACK THEY SAW WATER BUBBLING FROM THE SURFACE. THE SOURCE OF THE PUMICE STONE WAS AN UNDERWATER VOLCANO THAT WAS ACTUALLY ERUPTING AT THE TIME! THEY ANCHORED TO WATCH THIS TREMENDOUS EVENT. MASSIVE PLUMES OF SMOKE FILLED THE SKY. AS THE SMOKE CLEARED, THEY NOTICED SOMETHING STRANGE JUST AT THE WATER’S SURFACE…. THE STUNNED CREW COULDN’T BELIEVE WHAT THEY WERE SEEING: IT WAS THE ACTUAL BIRTH OF A NEW ISLAND. THEY SAILED A LITTLE BIT CLOSER TO SEE IF THEIR EYES WERE PLAYING TRICKS ON THEM. BUT IT WAS REAL. THE PEAKS OF THIS NEW LAND MASS WERE ALREADY TAKING FORM. IT WAS ONE OF THE RAREST EVENTS IMAGINABLE. They were so lucky! Not only because they were able to witness such an impossible sight… but also because they barely escaped with their lives!