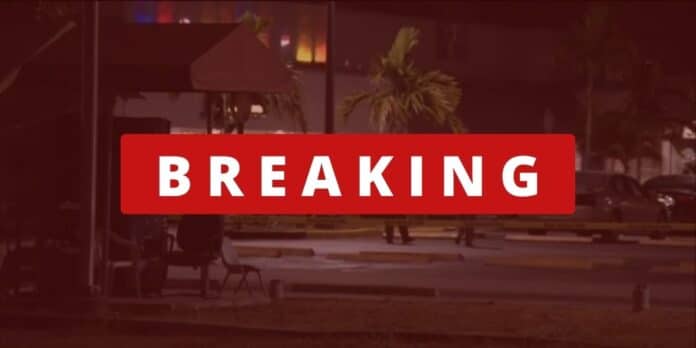 Two people were killed and 20 wounded in a shootout that began when three shooters wearing ski masks and hoodies sprayed bullets at a crowd gathered for a rap album release concert in Northwest Miami-Dade early Sunday morning, in what police said was the worst mass shooting in the county in recent memory.

Three of those injured are in critical condition, according to police.

Shortly after midnight, a white Nissan Pathfinder pulled up to the El Mula Banquet Hall near Hialeah.

That’s when three people “stepped out of the vehicle with assault rifles and handguns and started firing indiscriminately into the crowd,” Ramirez said.

The shooting started shortly after midnight, Miami-Dade Police Director Alfredo “Freddy” Ramirez said, when three shooters armed with handguns and semi-automatic rifles emerged from a white Nissan Pathfinder and fired dozens of bullets “indiscriminately” into a crowd gathered for a rap concert outside the El Mula Banquet Hall near the Country Club of Miami. Ramirez told the Miami Herald that the shooters sat patiently in the vehicle waiting for the target — or targets — to leave the club before exiting the SUV and taking aim.

Some unidentified people in the crowd shot back at the suspects, Ramirez said.

The two people killed in the shooting were pronounced dead at the scene.

Investigators had not identified any victims, suspects or motives in the shooting by mid-Sunday afternoon. But Ramirez said during an early-morning press conference outside the Country Club Shopping Center, where the shooting took place, that the latest attack was “definitely not random.”

Police going through the scene Sunday morning found dozens of bullet casings. They scoured social media and planned to staff any other parties around town with off-duty cops.

As technicians continued to document the massive crime scene, the hunt was on for the three masked attackers — believed to be men — and the white Nissan Pathfinder they used to ambush the crowd and escape. Investigators also began poring over social-media accounts and surveillance videos, trying to determine whether the rappers or their associates — or other attendees who went to the club — had been targeted as part of an ongoing feud.

Meanwhile, family and friends of the victims waited outside of Ryder Trauma Center at Jackson Memorial Hospital, at one point holding hands in a prayer circle as they awaited news of their loved ones.

The venue where the shooting occurred, El Mula Banquet Hall, located in the Country Club Shopping Center in an unincorporated area north of the State Road 826 big curve, has been on the radar of police for some time.

El Mula, which used to be called Magic Mushroom, had been rented out for the evening, according to police. The venue, located at 7630 NW 186th Street, was hosting a Memorial Day Weekend album release party on Saturday night featuring live performances from local rappers, including ABMG Spitta, according to several event fliers posted on Instagram. The flyer incorrectly listed Hialeah as the city where the event was taking place.

Ramirez said one of the victims shot in the ankle was a rapper, although he couldn’t confirm if it was the same rapper advertised on the flier.

The owner of El Mula is listed as Joseph Medlin, 28, of Hollywood, who also runs a daycare in Dania Beach. His Instagram had been live on Saturday morning, but was later taken down. He did not return multiple calls and messages seeking comment on Saturday.

El Mula’s Instagram account, which had been publicly accessible most of Sunday, was abruptly changed to private. And another event planned for Sunday night at El Mula was canceled because the banquet hall is still an active crime scene.

A promoter whose cell number is included on El Mula’s Instagram page declined to answer any questions from a reporter. “I have nothing to do with that club,” he said on Sunday morning. “I don’t know what happened last night.”

Ignacio Alvarez, a retired Miami-Dade police major who worked the district where Sunday morning’s shooting occurred until 2016 and now runs a Miami law firm, said he’s quite familiar with the club where the shooting happened. He said the space has been rented out for years for parties and several times police were called to break up fights.

“They never gave police a heads up when they were having large parties,” he said. “There were lots of fights. At least back then, they weren’t hiring off-duty officers. At the very minimum, they should have had off-duty or told police about the event.”