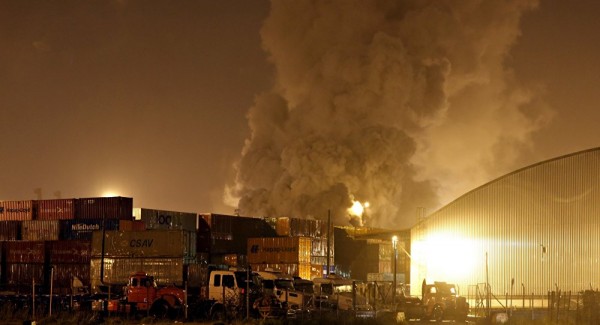 Officials in the municipal city of Santos in the state of São Paulo, Brazil have confirmed that a deadly explosion has hit the city, releasing toxic gas into the atmosphere.

The incident is said to have happened on late Thursday after a heavy downpour in the city. Photos posted by news agencies showed thick smoke rising into the sky in the area where the explosion happened.

Santos is a major seaport for Brazil. It is located in the southern part of the country. The explosion is said to have put the city’s population indoors.

According to city officials, the explosion took place at a chemical cargo warehouse. Local media quoted the company operating the warehouse as saying that the containers in the warehouse were full of acid and a disinfectant. And rainwater came into contact with the containers, causing a reaction. This caused the explosion, sending the toxic gas into the atmosphere. The toxic gas is said to be spreading fast. The warehouse is said to be operated by a logistics company called Localfrio. A spokeswoman for the company told reporters that the containers were filled with chloric acid and sodium dichloroisocyanurate, a cleaning and disinfectant agent. The company exports chemicals used for refrigeration and general cargo.

BBC reports that the cargo terminal and nearby homes have been evacuated, and residents have been asked to stay inside by city authorities. The Fire Department said firefighters had not gained complete control of the fire by nighttime.

The city’s mayor, Mario Antonieta de Brito confirmed that at least 66 people have been taken to hospital. And they are facing serious breathing difficulties. Some of those taken to hospital are said to be on life support. However, we were unable to independently verify this claim. Mr Brito asked the city’s residents to stay out of the rain which could contain chemical elements that can burn the skin.

He also said the toxic substances caused eye irritation, throat, nausea and fainting among some residents who came into contact with it. The State Dock Company of Sao Paulo suspended the seaport’s operations, stopping ship movement as a precautionary measure to the incident.

Experts say sodium dichloroisocyanurate is a highly toxic product. It acts as an irritant, causing long-term environmental damage, particularly to aquatic life. As a precautionary measure, the chemical is supposed to be stored away from water and direct sunlight.

This Article (Breaking: Dangerous Chemical Explosion Releases Toxic Gas In Brazilian City) is free and open source. You have permission to republish this article under a Creative Commons license with attribution to the author and AnonHQ.com