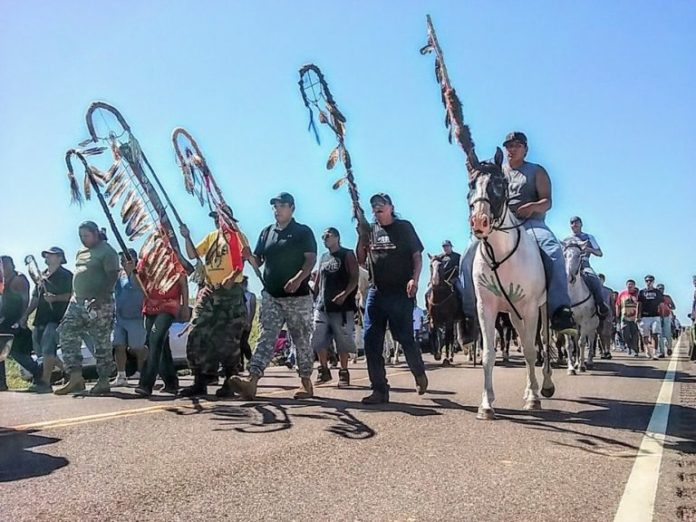 By: Whitney Webb  The battle over the construction of the Dakota Access pipeline came to an abrupt halt this afternoon as the US Departmentt of Justice (DOJ) issued  a joint statement with the Department of the Army and Department of the Interior that will temporarily stop construction on the controversial project. The statement was issued only hours after a federal judge denied a motion filed by the Standing Rock Sioux tribe to terminate the pipeline’s construction. According to the DOJ statement, the concerns raised by the Standing Rock Sioux tribe as the motivation behind the injunction, which warranted a reconsideration of federal approval for the pipeline’s construction. In addition, the statement said that general guidelines for the approval of similar pipelines were also called into question. However, it is important to note that only a critical section of the pipeline is affected by the DOJ statement. Construction will only be prevented from moving forward on Army Corps land that borders or goes under Lake Oahe but all construction within 20 miles east or west of the lake has also been requested to stop until a decision is made regarding the Army Corps land in question. Regardless, the decision to temporarily halt the pipeline’s construction will likely be seen as a major victory for Native American protestors and their allies.

The decision by the DOJ, Army, and the Departmentt of Interior follows  confrontations with a private mercenary group at the construction site earlier this week, which caused outrage on social media. The national guard  was also called in yesterday, which added to fears that the more violent confrontation would take place. Also, just last Saturday, Dakota Access bulldozers bulldozed  a two-mile long, 150-ft wide path through an area that contained sacred burial grounds of the Standing Rock Sioux tribe. That specific burial ground had previously been cited by the Sioux as sacred when they contested construction permits for that area earlier this year. This may also have been an influence in the government’s decision. It is also possible that the increase in interest among the general public in the Dakota Access protests after several celebrities recently expressed solidarity with the Sioux and after North Dakota issued an arrest warrant for Green Party candidate Jill Stein over her role in the protest. The company behind the pipeline, Dallas-based Energy Transfer Partners, expressed frustration with the government’s decision and claimed the decision will cause significant financial losses for every day construction is delayed.

Interestingly, nearly half of the official DOJ statement discusses the highlighted need for nationwide reform regarding the importance of tribal views on projects similar to the Dakota Access pipeline. This fall, tribes will be invited to formal, US federal government to tribal government consultations that will discuss whether new legislation should be introduced to promote the protection of tribal lands, resources, and treaty rights. This will surely be welcome news to Native Americans who have historically seen their rights trampled upon by both the federal government and private corporations. Recent events involving environmental pollution, pipeline construction, and Native American tribal lands that have happened in recent years were likely influences in the government’s statements. The protests against the Keystone XL pipeline have been ongoing for years.

This past April, groups of Native Americans marched on Washington to protest the Keystone pipeline’s construction through native lands. In addition, the 2015 mining waste disaster on Navajo Nation territory may have also motivated the government’s decision to reevaluate tribal concerns about the environment. The spill occurred when a crew supervised by the Environmental Protection Agency (EPA) spilled toxic mining waste into Navajo Nation territories and waters that turned large parts of the Animas River yellow. The EPA has said that the effects will take decades to clean up while 30,000 acres of Navajo crops are now without irrigation. Though the decision to halt the Dakota Access pipeline is only temporary, hopefully this represents the beginning of a long overdue reversal on the federal government’s policy regarding Native American rights, lands, and resources.

This article (BREAKING: DOJ Temporarily Stops Dakota Access Pipeline) is free and open source. You have permission to republish this article under a Creative Commons license with attribution to the author and TrueActivist.com