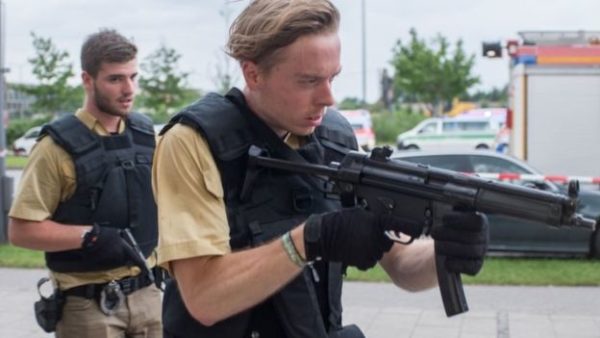 Police in Germany have confirmed that nine people have died while 20 others have sustained serious injuries after unidentified gunmen stormed a busy shopping mall in the southern German city Munich, on Friday evening.

The attack happened precisely at the Olympia mall in the north-western Moosach district. Witnesses said they saw three men with long guns. As of the time of writing, the attackers were still on the run. The police have launched a massive hunt for the suspects. Residents have been warned to stay indoors and city officials have declared a state of emergency. Public transport has been suspended in the city. The police have announced that residents should avoid public places. Many people are reportedly stranded in the city, as there is no transport to take them to their homes from their various work places.

Residents who are already at homes are opening their doors to these stranded people, allowing them to spend the night, to avoid being on the streets. A hashtag on Twitter named #Offenetür (open door) has been activated to help stranded people.

A city resident identified as Dominic Faust, who lives near where the shooting occurred, described what he saw during the shooting to the BBC.  “Those people told us that there was a shooting outside and so the security closed the door of this mall and asked everybody to go upstairs to the fifth floor,” Faust said. Another man working at a petrol station in the city also described the chaos. “We see just ambulances and firemen and police but all this area is evacuated, all the streets. Now [there] are no cars just on the side of the streets. All of the streets are blocked. I see that the people are scared. Everybody is running around.”

A worker at the mall, who pleaded anonymity,y also told the BBC News Hour program that she saw the gunmen storm the mall, shooting indiscriminately at people, before escaping. She confirmed seeing bodies from where she was hiding. She added that police arrived later and evacuated the area.

A police spokesman confirmed to the German public broadcaster, ARD that about 100 people witnessed the attack, and that all of them are now receiving counseling from a crisis response team. The police later described the incident as “an acute terror situation.” DW News reports that the police are examining one of the nine dead bodies to determine whether it is that of one of the suspects who carried out the attack.

Many police helicopters together with the country’s Special Forces have been deployed in the city to track down the attackers. Other elite forces of the country too have joined the hunt. Bavaria’s Prime Minister Horst Seehofer has been briefed on the incident by his security advisers. The Interior Minister of Germany, Thomas de Maiziere is said to be on his way to the United States, but has been forced to return home due to the attack.

This is the second attack in Germany in less than a week. On July 18, a teenage migrant stabbed and injured five people on a train around 300km south of Munich. The so-called Islamic State of Iraq and Syria later claimed the attack. Since then, German security forces have been on high alert. Security officials warned of possible further attacks after the train incident. Angela Merkel’s chief of staff, Peter Altmaier said the security forces and investigators are trying to figure out who are behind the attack, and their motives. He said they are considering all available theories to identify the perpetrators.

“At the current point, we are not ruling out any hypotheses. There is no clarity or certainty as yet. So I would ask that we respect the confidentiality of the investigations, so as not to endanger their chances of success. You can presume that we will of course analyze this possibility,” he said.

This article (BREAKING NEWS: Munich Shooting: Unknown Gunmen Kill Nine and Injuring 20 0thers at a Shopping Centre) is a free and open source. You have permission to republish this article under a Creative Commons license with attribution to the author and AnonHQ.com.