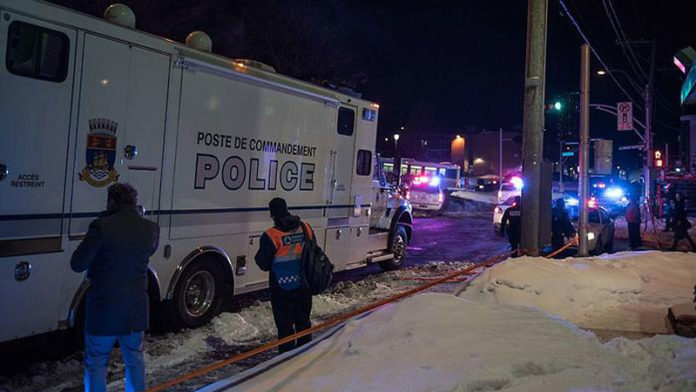 QUEBEC CITY, CANADA – So far, reports coming in have confirmed 6 people killed and at least 8 wounded after a “terrorist act on Muslims” took place in a local Quebec City mosque.

Limited details at the time of the shooting were released, however, a spokeswoman for the Quebec provincial police had confirmed that two arrests were made. At the time, Reuters quoted a witness as saying that there were 3 shooters involved in the attack.

Alexandre Bissonnette, 27, has been identified as the accused who has left six dead and a further 8 wounded in the Sunday night massacre.

The 27-year-old was armed with a rifle when he entered upon members in a mosque while they prayed.

Police made the arrest on Monday morning, and Bissonnette is expected to face murder charges.

A second man taken into custody, Mohamed el Khadir, is no longer considered a suspect and has been released, rather, police have now called him a witness.

Local papers, including La Presse and le Soleil are calling the massacre a terrorist attack.

Le Soleil reports Bissonnette as a loner, and that comments made in the past on Facebook were perhaps an indicator of his behaviour. François Deschamps, a member of Welcome to Refugees group knew his identity from the trolling Bissonnette had done.

“We see a lot of what extreme right-wing people do and say,” Deschamps told the newspaper. He said Bissonnette made statements on their page, “acting like a troll.”

According to his Facebook page Bissonnette had recently moved into an apartment near the mosque. Studying politics at Quebec City’s Université Laval, he was known to have “right-wing political ideas, pro-Israel, anti-immigration. I had many debates with him about Trump. He was obviously pro-Trump,” said a classmate.

Bissonnette was also well known for being a hunter and gun owner, Le Journal de Quebec reported. But had no criminal record.

Quebec Province’s Premier Philippe Couillard has condemned the attack as “barbaric violence” and labelled it a “terrorist act on Muslims” while the Canadian Prime Minister Justin Trudeau said in a Tweet “Tonight, Canadians grieve for those killed in a cowardly attack on a mosque in Quebec City. My thoughts are with victims & their families.”

Following the attack there will now be an increased police presence at mosques in the city. This comes at the same time New York police numbers have been increased to help patrol mosques and other houses of worship.

The shooting occurred when gunmen opened fire on around 40 people inside the Quebec City Islamic Cultural Centre.

This article (BREAKING: Quebec City Mosque Terror Attack, 6 Dead, 8 Wounded) is a free and open source. You have permission to republish this article under a Creative Commons license with attribution to the author AnonWatcher and AnonHQ.com.