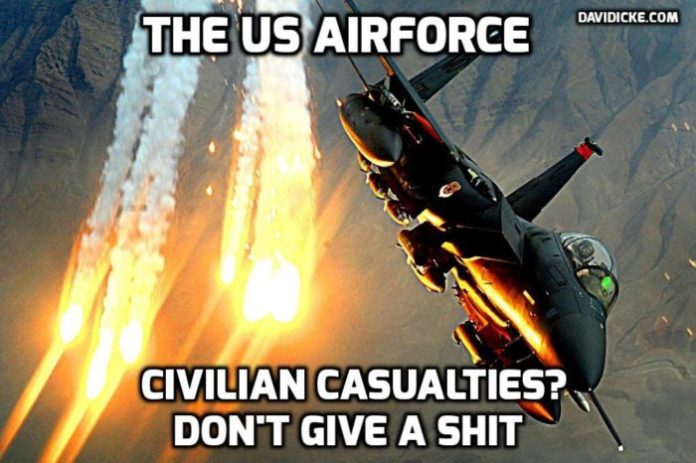 The United States coalition and Iraqi forces are fighting to retake the city of Mosul in northern Iraq from ISIS, who seized it some time ago.

Recently, reports emerging from Mosul point to a glaring slaughtering of civilians by the United States-led coalition. The coalition is in the air, providing support to Iraqi troops on the ground.

In early March, the United Nations Assistance Mission for Iraq (UNAMI) revealed the Mosul region has suffered the highest number of civilian casualties among Iraq’s provinces since February 2017, due to the ongoing operation to retake the area from ISIS. According to UNAMI, a total of 329 civilians have been killed and 613 others injured across the region in the month of February. The majority of these people were killed or injured from airstrikes by the coalition, as well as rocket and artillery fire from Iraq’s military.

UNAMI said it didn’t get full access to areas being constantly bombarded by the coalition and the Iraqi military. It revealed the death toll could be higher than what has initially been estimated. From this sickening UNAMI report, we expect the coalition would exercise extreme caution in future strikes.

Unfortunately, in Mosul, the carnage by the United States-led coalition is not stopping any time soon. Eyewitnesses have released a new video to the Associated Press showing a building hit by coalition airstrikes in the city. The building is said to have housed over 130 civilians who fled their homes due to constant bombardments and bullets fired between ISIS fighters and the coalition.

All the people in the building were buried under the rubble. As of writing, local volunteers had managed to pull only one person from the debris. This person was dead.

Local resident, Ahmed Ahmed said around 137 people were inside the building when the bombs were dropped. He stated that he had 27 family members in the building, revealing they all perished in the gory strikes.

The entire neighborhood was fleeing because of missiles that hit, so people had taken refuge here. I didn’t know if it was a shelter, I didn’t know we couldn’t go there. My entire family is inside, 27 people. We pulled only one of them out and don’t know about the rest. Yes, he was dead,” he said. A Kurdish journalist, Hevidar Ahmed of Rudaw news agency told RT English that ISIS has resorted to using innocent civilians as shields in the battle. He said this cruel method by the terrorists is rapidly increasing the civilian death toll, as the coalition is not paying close attention to what the terrorists are doing.

He explained: “The terrorists have used a new tactic. They climb on the rooftops of apartment blocks. There are 10, sometimes 15 families living in such houses. Thus, the number of people is at least 100. The terrorists don’t let them leave their homes, while climbing on the rooftop and firing at Iraqi forces, trying to prevent their advance. The Iraqi troops and international coalition forces don’t know that civilians are inside, and they fire back. Then, it becomes clear that there were entire families there.”

Hevidar further revealed that a similar situation happened in two locations in Mosul. According to him, coalition forces killed over 63 innocent civilians in these incidents. Mosul is said to be densely populated. The International Organization for Migration (IOM) reported recently that over 100,000 civilians have so far fled the city since February. But despite this huge number fleeing, it is estimated there are still over 700,000 people trapped in the city.

IOM said the humanitarian situation in the city is fast deteriorating. To complicate the matter, the western mainstream media have deliberately refused to report on what is currently happening in the city. Consequently, the battle in Mosul received less attention among charity organizations, which could’ve provided further forms of humanitarian assistance to the residents.

When Russia pushed the Western-backed rebels from Aleppo in Syria late last year, several reports were circulated by the mainstream media. In fact, CNN and its cohort affiliates faked reports that Russia was deliberately hitting civilians.

The media kept mute over the United States-led coalition slaughtering of innocent civilians in Mosul. The last time we checked at the Pentagon, it has yet to comment on the latest murders. Of course, the Pentagon will likely deny responsibility of the attack, or otherwise admit to it while playing down the number of civilians who lost their lives – calling it a technical error or collateral damage. The war on terror continues unabated. The creation of more terrorists also continues unabated as a result.

This article (BREAKING: U.S.-Led Coalition Bombs Civilian Mosul Shelter, Over 130 Feared Dead [Video]) is a free and open source. You have permission to republish this article under a Creative Commons license with attribution to the author and AnonHQ.com.