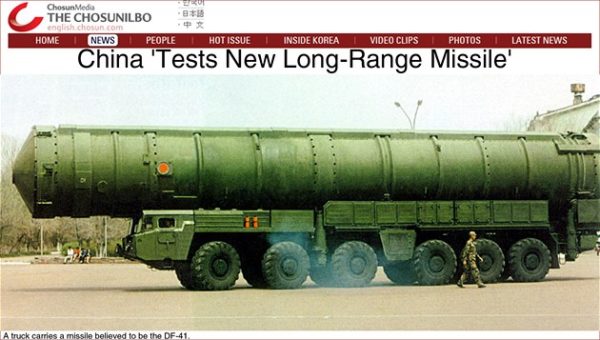 The United States has admitted that it is aware of the People’s Republic of China testing an Intercontinental Ballistic Missile (ICBM), which is capable of striking everywhere in the world within half an hour.

According to United States source, the long-range ballistic missile takes just 30 minutes to cover its maximum 12,000km range, and can deliver multiple strikes on any nuclear-capable state.

Some observers are worried that China might be conducting the test to warn the rest of the world that it will not back down on its decision to claim the disputed South China Sea, despite international ruling that it does not have the right to claim the area. However, it is said this ICBM test was conducted long before the ruling by the international courts, on the disputed area. United States officials say the Chinese conducted the test on April 13th, 2016. The specific place for the test was unknown to United States officials. During the time of the test, Chinese media reported that the People’s Liberation Army’s (PLA) high-ranking Gen. Fan Changlong was leading a group of military commanders to inspect construction works at a man-made island in the Spratly Islands group. The Islands are part of the contested South China Sea.

The Washington Free Beacon reports the missile was labeled Dongfeng-41 (East Wind, DF-41). The United States Satellite Tracking System reportedly detected and tracked the test of the DF-41 in real time. United States officials then obtained the data from the satellite and analyzed it. Not all the details of the weapon were made public. The Beacon reports that the launch was made from a new road-mobile platform, and is was the seventh test-firing of the DF-41. The deadly weapon was armed with two independently targetable reentry vehicles.

According to the RT English News, United States missile experts estimate the DF-41 to be an 80-ton, three-stage solid-fuel missile capable of carrying between six and 10 nuclear warheads in just a single mission. A United States official, who specializes in China military affairs, Rick Fisher said: “As with previous MIRV tests, the PLA has used a small number of reentry vehicles to mask the real capability of the DF-41, which is estimated to be able to loft up to 10 warheads.”

According to the Washington Free Beacon, the first information about the third generation Chinese ballistic missile capable of reaching any location within the United States, emerged in the American media in July 2014. One of the top officials at the United States Strategic Command, Cecil Haney admitted in early January 2016 that China is re-engineering its long-range ballistic missiles to carry multiple nuclear warheads.

In 2015, Kanwa Asian Defense magazine also claimed that China might add the DF-41 to its nuclear inventory as early as 2016. This claim by the magazine seems to be true, considering the level of military preparation the Chinese are making. Recently, China’s Defense Chief, Chang Wanquan told his country’s citizens to prepare for what he described as the people’s war at sea. Mr Wanquan reportedly made the statement while inspecting military installations in China’s eastern coastal province of Zhejiang. The Defense Minister said the Chinese public should be educated about national defense issues, because the country’s sovereignty and its territorial integrity are at risk.

Observers say Wanquan was referring directly to the international court’s ruling that China’s nine-dash-line claim in the South China Sea and its land reclamation activities on islets are invalid and unlawful.

This article (Build-up to WW III: China Tests ICBM Capable of Striking the United States Within 30 Minutes) is a free and open source. You have permission to republish this article under a Creative Commons license with attribution to the author and AnonHQ.com.