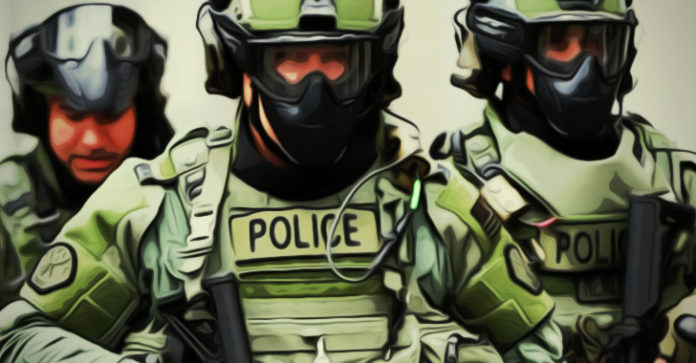 Written by Cassius Methyl at theantimedia.org

Sacramento, CA — A bill to stop the militarization of California police departments received final approval in the state legislature last Thursday. The bill is now on its way to the desk of Governor Jerry Brown.

A.B.36 establishes that California would “prohibit a local agency, other than a local law enforcement agency that is directly under the control of an elected officer, from applying to receive tactical surplus military equipment.”

Introduced by Assemblywoman Nora Campos of San Jose, Assembly Bill 36 (A.B.36) — if enacted into law by the governor — will prevent the transfer of heavy duty weapons of war to local police departments.

Americans are increasingly concerned with the Pentagon’s now prevalent practice of arming local police departments with weapons of war, from grenade launchers to M-16 rifles and MRAP armored vehicles.

The bill specifically points out the dangers of police militarization, saying it would “declare that this is a matter of statewide concern.”

The program incited alarm when schools received grenade launchers and collections of M-16 rifles. Those in question included the Los Angeles Unified School District’s police and police at the University of Louisiana, Monroe.

The controversies surrounding weapons transfers like these have chipped away at support for the 1033 program.

The transfer of military weapons to local police is considered by many to be reckless as the policy raises the risk for abuse of power.  Assemblywoman Campos highlighted these concerns: “Due to recent events of police brutality, distrust between law enforcement and many of our communities remains at an all-time high,” she said. “Further exacerbating the issue is the recent militarization of law enforcement agencies and a movement away from community policing across the nation.”

The following examples from non-profit news organization The Marshall Project illustrate the scale of the weapons transfer program:

Is it a good sign that California lawmakers are concerned about the 1033 program? Why does the Pentagon want to arm these police departments and organizations so heavily in the first place?

This article (California Bill Bans Police from Getting Grenade Launchers and Tanks from Feds) is free and open source. You have permission to republish this article under a Creative Commons license with attribution to Cassius Methyland theAntiMedia.org. Anti-Media Radio airs weeknights at 11pm Eastern/8pm Pacific. If you spot a typo, email [email protected].