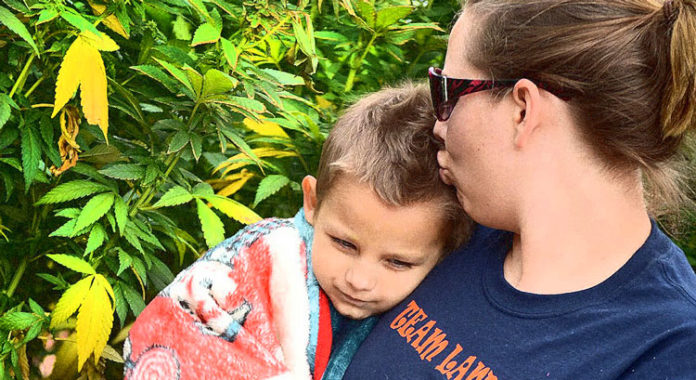 A young boy named Landon Riddle was diagnosed with Leukemia, and was told by his doctors that he only had an 8-10% chance of living for more than a day or two.

“His whole chest was full of leukemia tumors, which is why he couldn’t breathe. They started him on chemo, but told us that he probably wasn’t going to make it,” his mother, Sierra Riddle said.

After two months of Chemotherapy, Landon became sick and would refuse to eat. According to his mother, he would vomit up to 50 times a day, and the doctors eventually lost hope, seeing no other solution than Chemotherapy.

Then one day, Landon’s grandmother suggested that they look into cannabis oil treatment.

“We discussed all of our concerns with his medical team in Utah and watched Landon continue to suffer and wither away as the piled on drug after drug. Then my mother came across cannabis oil online,” Riddle told RYOT.

The family then fled the state of Utah for Colorado, where cannabis oil treatment was legal.

In just days, Landon began vomiting less and less each day and finally began to eat.

“Our hearts were filled with joy that cannabis brought back the smile to Landon’s face. Landon started getting better and better! It was as if a miracle had happened! He was smiling again and started to eat again!” Sierra wrote on her blog during his treatment.

“It is atrocious that anyone on the planet would be charged for choosing cannabis over pharmaceuticals. My heart goes out to Adam Koessler and Rumor Rose, along with uncountable other families that are affected by cannabis prohibition. Get ready for the fight of your life. Having a sick child is a battle in itself, but making this choice is a whole new world. You’re going to need thick skin, intuition, and a solid team. Don’t waste time making sure every other pharmaceutical does more harm than good. If it feels wrong in your gut, it’s probably wrong,” she added.

Now, Landon’s cancer is in remission.


John Vibes writes for True Activist and is an author, researcher and investigative journalist who takes a special interest in the counter culture and the drug war.

This article (Cannabis Oil Cures 3 Year Old Boy Of Cancer After Doctors Gave Him 48 Hours To Live) is free and open source. You have permission to republish this article under a Creative Commons license with attribution to the author and TrueActivist.com.