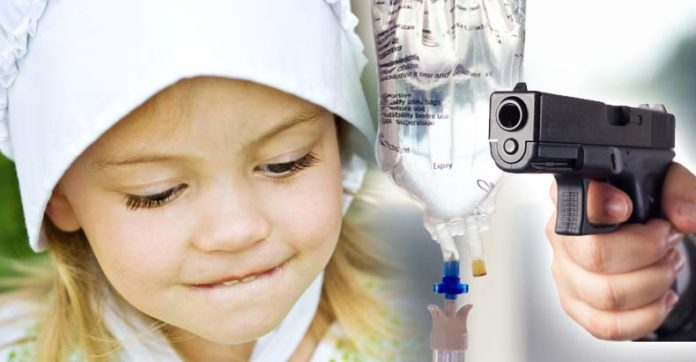 Sarah Hershberger, a 12-year-old Amish girl who was forced to flee from the government agents attempting to kidnap her and put her through chemotherapy, has been declared entirely healthy and cancer-free. Doctors at the Akron Childrens Hospital, the government hospital that treated the young girl, testified in court that Sarah would die within six months if her family were permitted to refuse her chemotherapy.

In June of 2013, Sarah was receiving chemotherapy at the hospital despite her parent’s objections. The girl’s parents, Andy and Anna Hershberger, strongly believed the chemotherapy treatment was significantly worsening their daughter’s condition.

“We were pretty sure we were going to lose her if we kept doing the chemo,” Anna Hershberger, Sarah’s mother said.

In an effort to save their daughters life, the parents decided to object to further treatment. In response to this action, the Akron Hospital took the parents to court to obtain “limited guardianship” of the girl. For the case, doctors at the hospital testified that Sarah Hershberger would not survive another six months without the chemotherapy.

The court ruled that Maria Schimer, an attorney and registered nurse, should be granted limited guardianship over the young girl and the power to make medical decisions on her behalf. However, a judge formally ended the court-ordered guardianship after the family fled and went into hiding.

Today, two years after the doctors testified Sarah would not survive six months, Sarah is not only entirely healthy, but is also cancer-free.

Maurice Thompson, the executive director for the libertarian non-profit 1851 Center for Constitutional Law, said Sarah shows no signs of cancer and appears to be healthy. “She had MRIs and bloodwork, and the judge over the last year helped facilitate at least one trip to the Cleveland Clinic. The MRIs did not show any cancer,” Thompson told The Medina-Gazette. “I know how she looks isn’t really an indication of whether she has cancer, but she’s looking very healthy.”

The clip feature bellow was filmed during the legal battle in 2013:

This Article (12-Year-Old Amish Girl Declared Cancer-free After Fleeing From Government Agents Attempting To Kidnap Her and Force Her Through Chemo) is free and open source. You have permission to republish this article under a Creative Commons license with attribution to the author and AnonHQ.com.