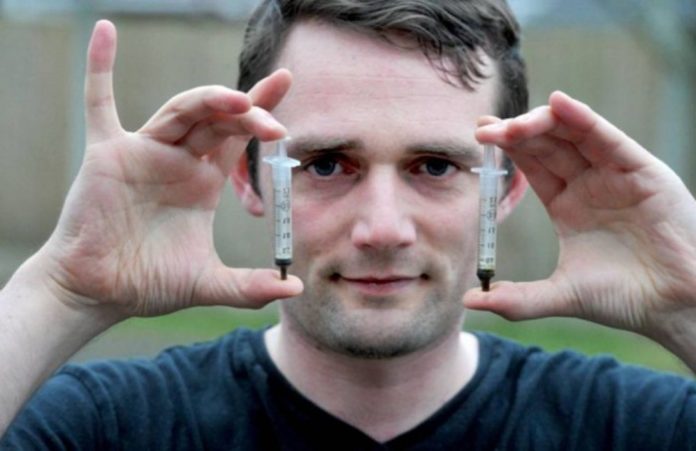 David Hibbitt, 33, was diagnosed with stage III bowl cancer in July 2012 and underwent chemotherapy, radiotherapy and surgery at the Christie Hospital, Manchester, to remove his large intestine in March 2013. But the painful treatment failed to cure him. When he was told the cancer was in the lymph nodes in his groin, and that he had 18 months to live, David turned to cannabis oil.

“This time they told me there wasn’t a lot they could do. In July, after doing a lot of research, I got some cannabis oil. I was having chemo, and I was getting to a point where I couldn’t really do much, I had no energy. In August I decided I’d had enough and I was going to stop the chemotherapy. In October, I had an operation to remove the affected lymph nodes at the Royal Stoke University Hospital. But I chose to carry on taking cannabis oil rather than have any more treatment, deciding against further chemotherapy sessions,” he told The Daily Mail.

In January 2015, doctors declared him cancer-free. He married his partner of six years Heather Martin, 26, in April to begin afresh. “Friends had told me about cannabis oil and I dismissed it at first. I’ve never been into drugs. But in February 2014 I was told I only had 18 months to five years to live, and I felt I had to try everything I could. I felt like the chemo was killing me and I had nothing to lose. I couldn’t accept I was going to die. I pay around £50 for a gram from a bloke I know who makes it. That lasts me about a month usually. It gets your pretty high and knocks you for six, but it’s nowhere near as bad as chemotherapy. The pain just seemed to disappear and it seems to have done the job. I just want to make other people aware that there are other options out there,” he added.

Cancer Research UK says it is aware of patients using cannabis extracts to treat themselves but stressed there is ‘no good evidence’ to prove it was safe and effective. The charity is supporting clinical trials into the use of the drug and a synthetic cannabinoid to treat cancer.

This Article (Cannabis Oil Saves Cancer Patient Who Had 18 Months To Live) is free and open source. You have permission to republish this article under a Creative Commons license with attribution to the author and AnonHQ.com.