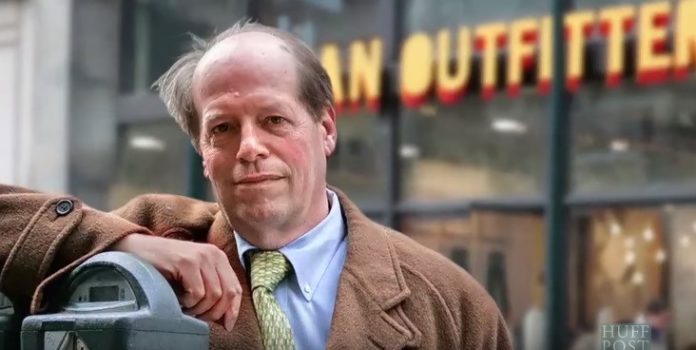 Urban Outfitters, the clothing chain that offers young people “bohemian, hipster, ironically humorous, kitschy, retro, and vintage styles,” is not all what it seems. The store, which has become incredibly popular with the todays progressive and modern youth, is actually hiding away some very dark secrets, the majority of which would not be received well by their customers.

In a video released by The HuffPost Show (featured below) some shocking facts about the chain Urban Outfitters are revealed. In the list below we have round up 4 of the most shocking facts from that video to help you become a more informed and ethical shopper.

The President and CEO of Urban Outfitters, Richard Hayne, is a supporter of the anti-gay politician Rick Santorum. According to PolitiFact, Richard Hayne has “given over $14,000” to the noted homophobe. Reportedly, at least $1,000 of these donated finances were made after Santorums made statements “comparing homosexuality to beastiality.”

Haynes views on homosexuality, although unrevealed—he said  in a statement regarding the matter, “I have my own opinion, but I am not going to share it.”—are also playing a role in his business.

Although Urban Outfitters has appeared in the news multiples times for their offensive products, it appears many people are still unaware that the company is profiting at the expense of others. So far they have essentially insulted every race, religion and gender with their insensitive and often stereotyping products. Disturbingly, the company even released a Kent State sweatshirt designed to look like it was covered in bloodstains; in 1970 four students died at the school shooting.

Many independent designers and craftspeople have accused the company of stealing their entire designs; on multiple occasions once these accusations have been made, the company soon removed these products from their stores. As speculated by writer Courtney Heitter, the company likely takes theses chances because of “its dominance within the industry.”

When the company isn’t stealing other people’s work they are “freeloading off people’s cultures.” As mentioned in the HuffPost Show, the Navajo Nations sued Urban Outfiters from trademark infringement after the company release a line of products using the tribe’s name and symbols.

In the last quarter on 2015, the company achieved record sales of just over $1 billion. It can therefore be assumed that as the company grows financially it will steadily gain more power within the industry. With this power, the company is likely to continue to steal other’s creative work and profit from offensive products.

This Article (4 Reasons To Stop Shopping At Urban Outfitters) is free and open source. You have permission to republish this article under a Creative Commons license with attribution to the author and AnonHQ.com.