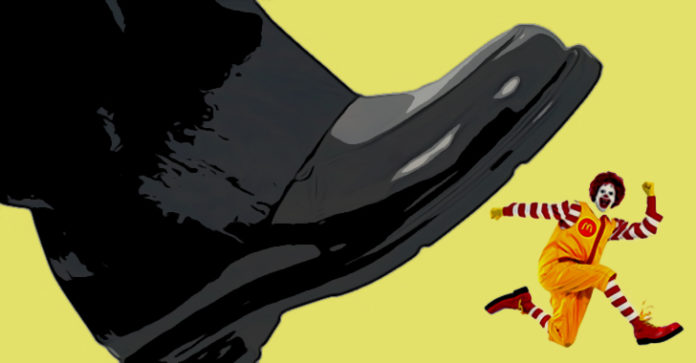 For the first time in over four decades, McDonald’s is shrinking. The fast food giant is currently closing more restaurants in the United States than it is opening, signifying a period of contraction for the global corporation.

McDonald’s announced in April that it would be closing 700 “underperforming” locations, but because of the company’s sheer size—it has 14,300 locations in the United States alone—this was not necessarily a reduction in the size of the company, especially because it continues to open locations around the world. It still has more than double the locations of Burger King, its closest competitor.

McDonald’s spokesperson Becca Hary insisted the closings were “minimal” in comparison to the number of stores that will remain open, but the marked decrease in “productivity” highlights a growing shift. After 45 years of consistent growth, McDonald’s appears to have plateaued—at least for now.

Though the chain has dominated the fast food market for decades, recent competition and health consciousness has challenged the popularity of its product. The growth of chains like Chipotle, which recentlystopped using genetically modified ingredients, has reportedly diverted customers away from McDonald’s. Additionally, the company is losing a share of its young patrons while the rise of boutique burger chains such as Five Guys has put a dent in profits.

According to the Associated Press, “McDonald’s Corp. has not reported an annual reduction in U.S. locations since at least 1970, according to archived filings with the Securities and Exchange Commission. For 1969, McDonald’s did not include a U.S. store count in its annual report.”

Further, “The company declined to comment on the last time it reduced its U.S. store base. But given the rapid expansion that characterized its early years, it’s likely McDonald’s hadn’t pulled back since Ray Kroc founded the company in 1955.”

The increased closures denote a growing shift in dietary preferences among Americans. This is consistent withrecent moves by fast food chains to remove toxic chemicals from their ingredients, as well as with the exponential growth of organic, healthy alternatives.

Nevertheless, McDonald’s will continue to open stores around the world. The closures were interpreted by Mike Donahue, a former chief communications officer for the company, as a way for McDonald’s to strengthen its base of stores.

“What they’re doing is pruning the tree,” he said.

Even if this is true, McDonald’s has made attempts to appeal to increasingly health-conscious consumers. In addition to exploring organic options, it has launched a crafty PR campaign to mitigate bad press. For example, it recently produced a video downplaying the concerning fact that their fries contain 19 ingredients.

These desperate attempts demonstrate that even if McDonald’s continues to rake in billions in profits for now, shifting attitudes and habits continue to jeopardize the hegemony of increasingly loathed fast food companies.