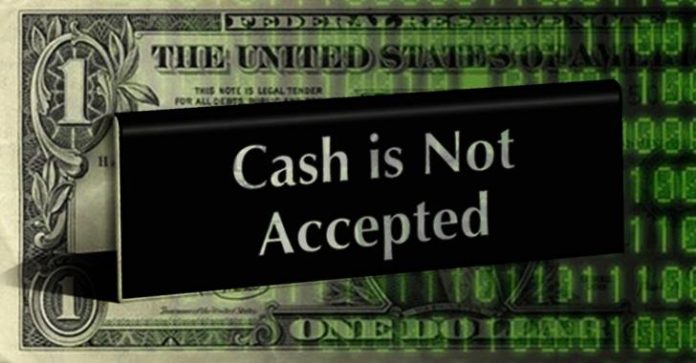 By Shaun Bradley at theantimedia.org

As physical currency around the world is increasingly phased out, the era where “cash is king” seems to be coming to an end. Countries like India and South Korea have chosen to limit access to physical money by law, and others are beginning to test digital blockchains for their central banks.

The war on cash isn’t going to be waged overnight, and showdowns will continue in any country where citizens turn to alternatives like precious metals or decentralized cryptocurrencies. Although this transition may feel like a natural progression into the digital age, the real motivation to go cashless is downright sinister.

The unprecedented collusion between governments and central banks that occurred in 2008 led to bailouts, zero percent interest rates and quantitative easing on a scale never before seen in history. Those decisions, which were made under duress and in closed-door meetings, set the stage for this inevitable demise of paper money.

Sacrificing the stability of national currencies has been used as a way prop up failing private institutions around the globe. By kicking the can down the road yet another time, bureaucrats and bankers sealed the fate of the financial system as we know it.

A currency war has been declared, ensuring that the U.S. dollar, Euro, Yen and many other state currencies are linked in a suicide pact. Printing money and endlessly expanding debt are policies that will erode the underlying value of every dollar in people’s wallets, as well as digital funds in their bank accounts. This new war operates in the shadows of the public’s ignorance, slowly undermining social and economic stability through inflation and other consequences of central control. As the Federal Reserve leads the rest of the world’s central banks down the rabbit hole, the vortex it’s creating will affect everyone in the globalized economy.

Peter Schiff, president of Euro-Pacific Capital, has written several books on the state of the financial system. His focus is on the long-term consequences of years of government and central bank manipulation of fiat currencies:

“Never in the course of history has a country’s economy failed because its currency was too strong…The view that a weak currency is desirable is so absurd that it could only have been devised to serve the political agenda of those engineering the descent. And while I don’t blame policy makers from spinning self-serving fairy tales (that is their nature), I find extreme fault with those hypnotized members of the media and the financial establishment who have checked their reason at the door. A currency war is different from any other kind of conventional war in that the object is to kill oneself. The nation that succeeds in inflicting the most damage on its own citizens wins the war. ” [emphasis added]

If you want a glimpse 0f  how this story ends, all you have to do is look at Venezuela, where the government has destroyed the value of the bolivar (and U.S. intervention has further exacerbated the problem). Desperation has overcome the country, leading women to go as far as selling their own hair just to get by. While crime and murder rates have spiked to all-time highs, the most dangerous threat to Venezuelans has been extensive government planning. The money they work for and save is now so valueless it’s weighed instead of counted. The stacks of bills have to be carried around in backpacks, and the scene is reminiscent of the hyperinflation Weimar Germany experienced in the 1920s. Few Western nations have ever experienced a currency crisis before, meaning many are blind to the inevitable consequences that come from the unending stimulus we’ve seen since 2008.

In order to keep this kind of chaos from spreading like a contagion to the rest of the world, representatives are willing to do anything necessary, but this comes at a cost. Instead of having to worry about carrying around wheelbarrows full of money, the fear in a cashless society will likely stem from bank customers’ restricted access to funds. With no physical way for consumers to take possession of their wealth, the banking interests will decide how much is available.

The level of trust most people still have in the current system is astonishing. Even after decades of incompetence, manipulation, and irresponsibility, the public still grasps to government and the established order like a child learning how to swim. The responsibility that comes with independence has intimidated the entire population into leaving the decisions up to so-called  ‘experts.’ It just so happens that those trusted policymakers have an agenda to strip you and future generations of prosperity.

Some of the few hopes in this war against centralization are peer-to-peer technologies like Bitcoin and Ethereum. These innovative platforms have the potential to open up markets that circumvent state-controlled Ponzi schemes. The future development of crypto-assets has massive potential, but being co-opted is a real danger.

The greatest threat to individual freedom is financial dependence, and as long as your wealth is under someone else’s control, it can never be completely secure. Unfortunately, private blockchains are becoming increasingly popular, creating trojan horses for those just learning about the technology (in contrast, Bitcoin’s transaction ledger is public) . Without the decentralized aspect of a financial network, it is just a giant tracking database that can be easily compromised like any other.

The World Economic Forum released a report on the future of financial infrastructure. Giancarlo Bruno, Head of Financial Services Industries at WEF stated:

“Rather than to stay at the margins of the finance industry, blockchain will become the beating heart of it. It will help build innovative solutions across the industry, becoming ever more integrated into the structure of financial services, as mainframes, messaging services, and electronic trading did before it.”

The list of countries who are exploring integrating blockchain technology into their central banking system is extensive. Just to name a few; Singapore, Ukraine, France,  Finland and many others are in the process of researching and testing out options.

For those who appreciate more tangible wealth, diversifying into hard assets like gold and silver is a great first step. It’s not about becoming a millionaire or getting rich quickly, but rather, using precious metals as vehicles for investment in the long-term. Regardless of what events unfold over the decades to come, the wealth preserved in physical form is more secure than any other asset. Forty years ago it was possible to save your money in the bank and accumulate interest over time, but that opportunity no longer exists. Those who fail to adapt to this new financial twilight zone will likely find themselves living as slaves to debt for years.

Control and confidence are two of the most important things in the system we live in. Once these digital spider webs have been put into place, the ability for an individual to maintain privacy or anonymity will all but disappear. Only through understanding the subversive actions being taken can people protect themselves from having to put their future in someone else’s hands. The cash that allows free transactions without tax burdens or state scrutiny won’t be around much longer. There will be many rationalizations for a cashless society in the years to come, but without fixing this broken financial system first, this will only ensure that despotism gains an even sturdier foothold.

This article (Cash Is No Longer King: The Phasing Out of Physical Money Has Begun) by Shaun Bradley is free and open source. You have permission to republish this article under a Creative Commons license with attribution to Shaun Bradley andtheAntiMedia.org.