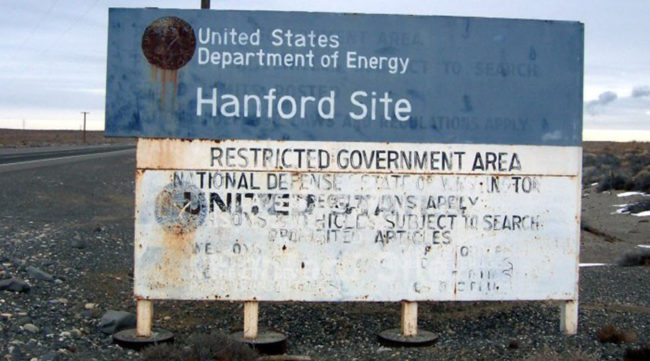 Hanford Nuclear Reservation officials are set to begin pumping an estimated 3,000 – 3,500 gallons of radioactive nuclear waste back into storage containers after a leak was discovered this past Sunday. It is said that the original container holding the material has been slowly trickling out waste, about 70 gallons worth since 2011 but officials are uncertain what accelerated the problem.

The federal government has long been aware of the problem at the Hanford Reseravtion and recently approved an initiative for $2 billion dollars over the next several decades to clean up contamination within the site. This past March the program was launched, starting with removing nearly 800,000 gallons from the compromised tank responsible for the leak this weekend. Before the leak occured officials estimated the tank was nearly 95% empty with only 45,000 or so gallons remaining. Officials are unclear if the pumping itself is responsible for the spread of the leak, but it is probable. Until they can clean up the remnants of the radioactive waste which has escaped, all other efforts at the site have been postponed.

Federal officials are downplaying the seriousness of the issue, but according to Mike Geffre, the Hanford Reservation manager who first discovered the leak in 2011: “This is catastrophic. This is probably the biggest event to ever happen in tank farm history. The double shell tanks were supposed to be the saviors of all saviors, to hold waste safely from people and the environment.”

What Mr. Geffre is alluding to when he calls these tanks saviors goes back to the reason why this facility exists in the first place. Dating back to the Manhattan Project in 1944, the facility produced plutonium used in nuclear weapons for decades. Today the site is used as storage for all of the nuclear waste created from processing this plutonium. The container which leaked is just one of 177 different containers holding radioactive waste from this era in American history. According to Brett VandenHeuvel, executive director of Columbia Riverkeeper, “these tanks were not designed to hold waste for decades. It’s past time to get the waste out of the unsafe tanks.” It is no surprise then that something like this could have happened in his opinion. Even the United States government “anticipated” the eventual leak, this is why they approved funding for the $2 billion to clean it up years ago.

The US Department of Energy stated Monday that “the good news is right now we have no indications that waste has reached the environment and there appears to be no threat to the public at this time. We continue to monitor it and have leak detectors in the area.” However they also noted that “it is too dangerous to actually send workers into a tank” to investigate the full scope of the problem. Furthermore, independent of the events of this weekend, the workers at the Hanford site are actively involved in a lawsuit against the United States government, filed last September “to ensure that their members and all workers at the Hanford nuclear site are protected from exposure to toxic vapors released from Hanford’s high-level nuclear waste tanks.”

According to the Official Legal Document: “Hundreds of employees work in and around the Hanford Tank Farms where the Department of Energy stores over 56-million gallons of radioactive and chemical waste from decades of plutonium production for nuclear weapons. These workers routinely encounter potentially toxic vapors with inadequate or non-existent protective equipment.

Over the years, some workers exposed to toxic vapors at Hanford have suffered serious long-term health effects such as brain damage, lung disease, and nervous system disorders.
We have had enough. For years, our members have been exposed and sickened, and Hanford management has denied ever exposing anybody. They don’t have the monitoring equipment in place, they don’t have enough people to do the monitoring, and worst of all, Hanford officials have made it repeatedly clear that they don’t think there is a problem.“

So when the Department of Energy comes out with a statement regarding a radioactive leak they have been aware of for nearly half a decade, stating that the facility “poses no danger to the public” you seriously have to take this with a grain of salt.

This article (“Catastrophic” Leak Releases Up To 3,500 Gallons of Nuclear Waste In Washington State) is free and open source. You have permission to republish this article using a creative commons license with attribution to the author and AnonHQ. Join the conversation at www.anonboards.com