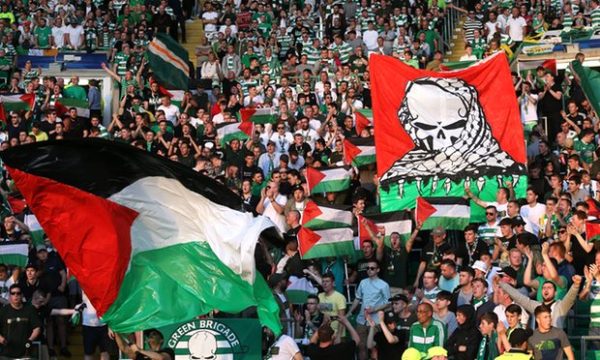 On August 17, 2016, during the Union of European Football Association (UEFA) Champions League football match in the Scottish city of Glasgow, supporters of the home team, Celtic Football Club, displayed the flag of Palestine to protest against Israel’s aggression against the people of the territory.

Celtic was playing an Israeli team, Hapoel Be’er Sheva, and the fans saw it as a very good opportunity to show solidarity with the people of Palestine. The fans called for an end to Israel’s aggression, including the killing of innocent defenseless people, and the granting of total independence to the people living in the territory. After the match, which ended 5-2 in favor of Celtic, UEFA officials announced a close examination of the incident and recommended a so-called disciplinary action against the behavior of the fans. The UEFA claims to have so-called rules that forbid the use of gestures, words, objects or any other means to transmit any message that is not fit for a sporting event, particularly messages that are of a political, ideological, religious, offensive or provocative nature.

During Celtic’s return league against Hapoel Be’er Sheva on August 23 in Beersheba, Celtic fans launched a fundraising campaign to raise money for two charities who are working to bring relief to the Palestinian people.

In Beersheba, the Israeli authorities were worried that Celtic fans will wave the flags of Palestine, like they did in Glasgow. The match ended 2-0 in favor of Hapoel Be’er Sheva, but Celtic progressed to the next stage of the competition, due to superior goals aggregate. Although the fans did not repeat what they did in Glasgow, on GoFundMe, the fans launched an appeal to raise funds for the people of Palestine. The fans raised more than £173,000 for their project. The fans said they were raising the money for Medical Aid Palestine and Lajee Centre. These two charities are said to be delivering health and medical care to the Palestinians worst affected by conflict, occupation and displacement, waged by the Israeli government against the Palestinian civilian population. The fans also said they are hoping to use part of the money to buy football kits and equipment to enable children living in refugee camps to have a football team, which would be called Aida Celtic. The team will play in the Bethlehem youth league. According to the fans, this will help put a little smile on the faces of the children who, together with their parents, are being repressed by the Israelis. The flag protest and the fundraising was led by a group of resilient Celtic fans known as the Green Brigade. On September 22, UEFA officials announced in a ruling that they have fined Celtic an amount of £8,616. The UEFA shamefully described in the ruling that the fine was as a result of the fans waving of an “illicit banner” in their Champions League match against Hapoel Be’er Sheva in Glasgow.

This was not the first time Celtic has been fined over the display of the flag of Palestine. In 2014, the club was fined about £16,000 after a Palestine flag was displayed at a Champions League qualifier against KR Reykjavik of Iceland. But when the fine was announced, many Celtic fans said they were very proud of what they have done. According to the fans, they have been able to draw the world’s attention to what is happening in Palestine. They said the display of the flag has exposed Israel’s aggression, and the hypocrisy of the UEFA, which is controlled by corrupt officials with a Zionist interest.

“Celtic is all about standing up for the rights of those who don’t have a voice and therefore I’m now delighted by a UEFA fine that’s only helped draw more attention to the human tragedy and showing how solidarity can force change. A UEFA fine won’t stop the momentum. I’m immensely proud of the Green Brigade and Celtic fans across the globe,” Celtic fan Will Gardner said on the UEFA fine against the club.

Another fan named John said: “UEFA pick and choose when they want to bring politics into football. A high-profile football match is the perfect place to highlight the wrongs in the world.” “Showing solidarity to the people of Palestine far outweighed this in many people’s eyes. Some things are more important in life. Celtic supporters have always stood up for the oppressed in all aspects of life, and Palestine is just one of the issues that fans over the years have consistently supported. The incredible response to the fundraising campaign only serves to prove the strength of feeling among Celtic fans and beyond,” a fan named Chris also said.

Celtic fans have made their stand. They have shamed the UEFA. They have shamed Israel.  Donations are still being accepted on the GoFundMe page. You can click here to donate the little you have, to support their noble initiative. You can help the determined and resilient Celtic fans make a difference in the world. After all, that is what we are also fighting for. We should support them!

This article (Celtic Fans Shame UEFA Over Palestine Flag Fine, Vow to Continue Activism for a Fair World) is a free and open source. You have permission to republish this article under a Creative Commons license with attribution to the author and AnonHQ.com.