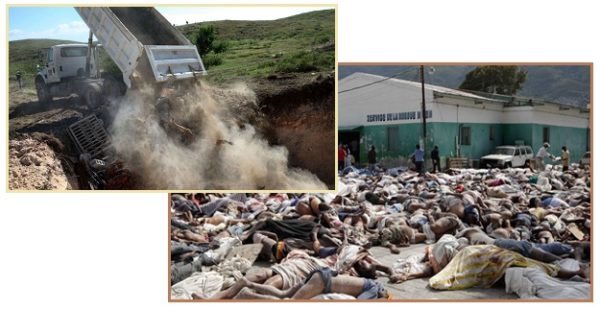 In the wake of the devastating storm, Hurricane Matthew struck the Caribbean Island nation on Oct. 4, 2016. Over a 1,000 people have lost their lives; many, too, are in dire need of humanitarian assistance.

According to meteorologists, the powerful hurricane reached 233 kilometers-per-hour in Haiti. The devastating wind also came with torrential rains. According to the United Nations Office for the Coordination of Humanitarian Affairs, more that 1.4 million people in the country are in need of urgent humanitarian assistance. On October 9, a government official told Reuters news in an interview that the storm itself has killed 1,000 people. The official also said that in the aftermath of the hurricane, a cholera outbreak has occured. The cholera outbreak is also said to have left around 10 people dead as of the time the official talked to the news outlet. Cholera causes severe diarrhea, killing within hours in severe cases left untreated. According to health experts, the disease is spread through contaminated water and has a short incubation period, which can lead to rapid outbreaks.

Meanwhile, humanitarian assistance to the country has been slow. The so-called international community is once again failing the Haiti and its people. Due to the overwhelming nature of the situation, the country’s government has resorted to the mass burial of the victims. The government confirmed the victims have been laid to rest in mass graves. Kedner Frenel, a senior government official in the Grand’Anse region, located on the western peninsula of the country, said authorities had to start burying the dead in mass graves in a town called Jeremie because the bodies were starting to decompose.

Frenel said 522 people were killed in Grand’Anse, alone. A tally of deaths reported by mayors from 15 of 18 municipalities in Sud Department on the south side of the peninsula showed 386 people there. In the rest of the country, 92 people were killed, the same tally showed. Some local residents in villages even believe the death toll brought by the storm is more than the 1,000 the government has reported. In certain areas of the country, the storm has devastated road networks, cutting such areas from the reach of rescue workers. On Jan. 12, 2010, a devastating earthquake measuring up to 7.0 magnitude, also struck Haiti. Between 100,000 to 316,000 deaths were reported from the disaster. More than three million people were also made homeless from the disaster.

The earthquake was one of the deadliest natural disasters to have happened in this Millennium. Many countries and organizations responded to appeals for humanitarian aid, pledging funds and dispatching rescue and medical teams, engineers and support personnel to help the country.

The aftermath of the earthquake left the country with a devastating cholera outbreak in October 2010. The United States Centers for Disease Control and Prevention estimates that it is the worst epidemic of cholera in recent history.  As of 2016, it is estimated that the disease had killed over 10,000 Haitians, sickening hundreds of thousands more. More than 6% of the country’s population is believed to have had the disease. This makes the current outbreak dangerous. If the country did not receive the needed support, it will resort in another humanitarian disaster on the Island.

This article (Over 1,000 People Killed by Hurricane Matthew in Haiti, Victims Buried in Mass Graves) is a free and open source. You have permission to republish this article under a Creative Commons license with attribution to the author and AnonHQ.com.