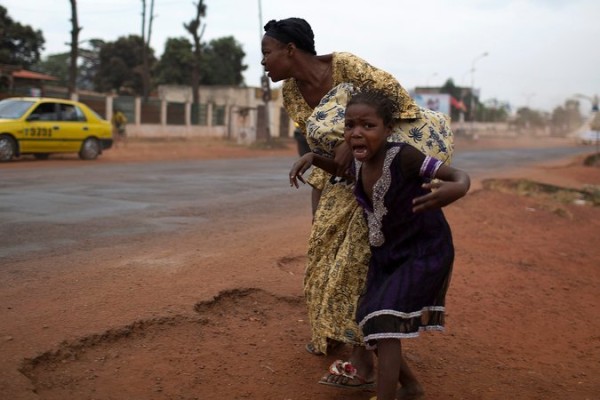 In March 2013, a group of militia consisting of mostly Muslims known as the Seleka, staged a successful coup in the Central African Republic (CAR) — a tiny country in Central Africa — to oust a Christian-led government.

Since then, the country has descended into total chaos with many independent observers saying the country is on the brink of collapse. To make matters even worse, some of the French peacekeeping forces deployed to the country to stop the conflict have been identified in a damning and dirty report stating that they have been sodomizing young boys in exchange of food.

For the conflict, the battle line has been clearly drawn. It is Christians against Muslims. The Muslim militia who seized power has been forced out of power by regional leaders in Central Africa. According to official figures, the CAR has a total population of 4.616 million — with more than 80% of the population Christians, against 15% Muslims. The Christians, taking advantage of their numbers, also formed a militia known as the Anti-Balaka, with the main aim of taking revenge against Muslims when they seized power, and truly, the Anti-Balaka has done exactly that.

Broadly speaking, the entire civilian population in the CAR has suffered very much, but no group has suffered more than the country’s Muslim minority. Many Muslims have been killed and many more have fled the country to Chad.

Somebody who has extensively followed proceedings in the CAR, is the Emergencies Director for the rights group, Human Rights Watch (HRW), Peter Bouckaert. He has reported on the vicious revenge carried out by the Anti-Balaka Christian militia against Muslim civilians. The situation was shocking and appalling, as he described what he found in the community of Bossemptele, about 185 miles north of the capital of Bangui.

“For paper-thin Halima [a 25-year old Muslim resident], who had stopped eating, dying seemed to be the only option left. ‘There is no one to help me,’ she said, crying. ‘I did not have the strength to climb on the trucks, and no one helped me. I kept calling after them to take me, but they left without me.’ All around us were the abandoned. Ten-year-old Mikaila and his sister, Zenabu, 15, both paralyzed by polio, said that their parents had dropped them at the Catholic Mission after a January attack and had not returned. Al-Hadj Towra, 70, his hands and feet wasted away from leprosy, had been left bedridden in his home, where a priest found him two days later,” Bouckaert wrote in the Washington Post, in March this year.

A report, released by HRW this year, revealed that almost all Muslim mosques in the CAR have been destroyed by the Christian militia in the conflict. The report also underscored the need for emergency actions to be taken to avoid a worse humanitarian crisis. Out of all the chaos and violence against the minority Muslims in the CAR, the international community has done very little to solve the crisis. The conflict has received less attention in the international mainstream media than it deserves. If you compare the attention being given to the Yemen civil war or the battle with the Islamic State of Iraq and Syria (ISIS), you will realize that the CAR has been all but forgotten.

Yasmin Khatun, a broadcast journalist who has also been following events in the CAR, told Mint Press News, “it is very difficult to know why the killings of Muslims have received less attention from the international community.” “I find it difficult to believe that’s it’s not given more attention, but maybe it’s simply that the politics of the situation don’t serve the interests of those shaping what we see. The CAR has been abused by corruption and plagued by violence and we’ve seen little to change that from the international community. I’m not the only one saying this, ask the aid workers at camps where assistance doesn’t arrive. There’s a reason the crisis in CAR is called the Forgotten Conflict. For these families and individuals [that remain], they are now an even smaller minority community trapped in enclaves from which they can’t escape. The Anti-Balaka are still on the roads and have not been contained,” she said. But is it really difficult to understand why the Western countries do not care about the conflict? When the so called uprising in Libya occurred in 2011, within a split second, NATO was there. Compare this to the Rwandan Genocide in 1994, in which more than one million died under the watch of these same NATO countries.

One of the main reasons for the coalition bombing campaigns against ISIS, is the fact that they are attacking and killing minority religious groups in Iraq and Syria. But then why is it that the Anti-Balaka in the CAR are not being bombed? They are also engaged in persecuting religious minority groups.

Based on these analyses, it is fair to agree with some observers who say the real reason why NATO and the coalition forces are intervening in certain parts of the world and leaving others, is for economic reasons. In Libya and the Middle East, there is oil. In the CAR, Rwanda and others, there is nothing. Western countries are therefore not ‘foolish’ enough to waste their bombs, aircraft and military machines on countries that cannot pay back. That is the reason. The minority Muslim community in the CAR will continue to suffer and nothing will be done. That is the world today for us. It is a world driven by material interest with morality and humanity completely thrown to the dogs.