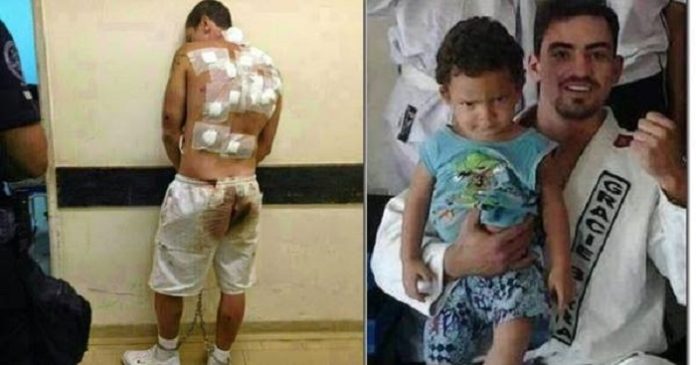 In Taguatinga, Brazil Jujitsu professor Daryell Dickson Menenzes Xavier was jailed in 2014 after turning self in with help from his lawyer in being sought for the awful and wrong rape of his own 1-year-old son. He has been just as brutally raped by a squad of 20 of his fellow inmates. This happened during his initial 30 day incarceration as he waited for hearing before a presiding judge.

During his jailing Daryell became the focus of the entire local prison resident population. This case of crazed vigilante justice is seen by many as him getting just as he deserved. His son is forever damaged and hurt, “so why not Daryell also?” some have to say.

Some outsiders are making shouts of calling the actions of the inmates as ‘uncivilized’ and extreme. Most in his native community sanction the events as seemingly karmic in nature. Most side with the vigilantes. The general public is alarmed, yet hardly anybody is really loudly protesting. Daryell is a marked man wherever he may have to go within the countries prison system.

At the police station, he met Gabrielle Star, the child’s mother.Daryell reportedly refused to respond to questions from Gabrielle, who wondered why the aggression and called for justice. He just told her : “At the appropriate time you will know.”

After the meeting, the mother published a new outburst on Facebook. “Now is the time I open my mouth!… I believed in the love and goodness in him, I supported him, I loved him, and accepted his faults without knowing there was something much worse” …Daryell Dickson Xavier Menezes stood beside me in the bed of my son for the first 2 days of hospitalization, supporting me, giving me strength, encouraging me and my family…”It was very hard for me to believe that my second love had killed my first love”

The stepfather was considered the prime suspect in the crime after providing contradictory testimony – he was the last person to have contact with the child. Michael was taken to the hospital, but could not resist and died two days later.

How do you feel about this story? Sound off in the comments?