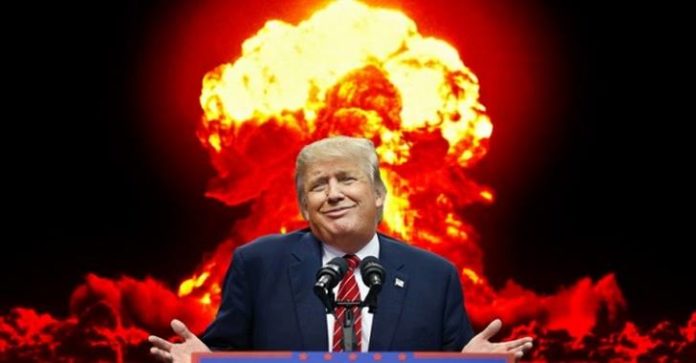 Beijing — Following comments made by White House spokesman Sean Spicer on Monday in which he said the United States would absolutely protect its interests in the South China Sea, the Asian superpower has fired back through its state-run media — going so far as to suggest China should beef up its nuclear arsenal in the face of Donald Trump’s presidency.

As reported by the newswire service Agence-France Presse (AFP) on Tuesday, “In recent days, Chinese social media has carried pictures purporting to show an advanced intercontinental ballistic missile system deployed in the Northeast.”

That missile system, the Dongfeng-41, was described by China’s state-run Global Times in a Tuesday editorial as “a nuclear solid-fuel road-mobile” system with “a range of 14,000 kilometers and a payload of 10-12 nuclear warheads” that can “target anywhere in the world” and is “widely considered one the most advanced intercontinental ballistic missiles.”

As AFP notes, the Times itself suggested the images of the Dongfeng-41 may have been leaked to social media by the Chinese military, the People’s Liberation Army, as a warning shot at Donald Trump.

On Monday, White House spokesman Sean Spicer appeared to echo the line taken by Rex Tillerson, Trump’s choice for secretary of state. At his recent Senate confirmation hearing, Tillerson raised eyebrows when he suggested the United States should block China from accessing its artificial islands in the South China Sea.

Saying “The U.S. is going to make sure that we protect our interests there,” Spicer went on to state:

“It’s a question of if those islands are in international waters and not part of China proper, then yeah, we’re going to make sure that we defend international territories from being taken over by one country.”

In response, China’s foreign ministry gave a statement in which it reiterated its unchanging position on its claims of sovereignty. Calling those claims “irrefutable,” spokeswoman Hua Chunying said “the United States is not a party to the South China Sea dispute” and that China wants the U.S. to “respect the facts, speak and act cautiously to avoid harming the peace and stability of the South China Sea.”

Meanwhile, the nation’s state-run media was suggesting it was time to strengthen its nuclear capacity.

However the images of the Dongfeng-41 system were obtained, China certainly isn’t backing away from the opportunity to flaunt its military might, and the Times editorial — as more and more are beginning to do — is very plain and unapologetic in its wording.

Stating the U.S. has “not paid enough respect to the Chinese military,” the piece further suggested that:

“China’s nuclear capability should be so strong that no country would dare launch a military showdown with China under any circumstance, and such that China can strike back against those militarily provoking it. A military clash with the US is the last thing China wants, but China’s nuclear arsenal should be able to deter the US.”

This article (China Just Issued a Nuclear Warning to Donald Trump and the United States) is free and open source. You have permission to republish this article under a Creative Commons license with attribution to James Holbrooks andtheAntiMedia.org.