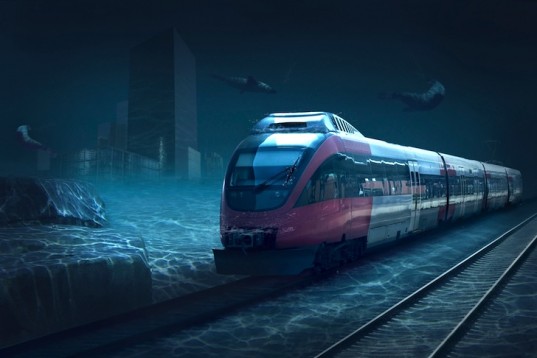 China wants to build a massive 8000-mile high-speed train line connecting China, Russia, Canada, and the United States via a 125-mile underwater tunnel. The route would begin in the country’s northeast and extend through Siberia and across the Bering Straight into Alaska. The entire trip would take two days, with the train traveling at an average of 220 miles per hour.

China is planning to build an underwater train to the US.

According to the state-run China Daily, the tunnel technology is already in place and will be used to build a high-speed railway between the south-east province of Fujian and Taiwan. The project will be funded and constructed by China but the details of this project are yet to be finalized.

A report in the state-run Beijing Times quoted Wang Mengshu, a railway expert at the Chinese Academy of Engineering, as saying, “Right now we’re already in discussions. Russia has already been thinking about this for many years.”

The Beijing Times listed the “China-Russia-Canada-America” line as one of four large-scale international high-speed rail projects the country wants to build. The first is a line that would run from London via Paris, Berlin, Warsaw, Kiev and Moscow, where it would split into two routes, one of which would run to China through Kazakhstan and the other through eastern Siberia. The second line would begin in the far-western Chinese city of Urumqi and then run through Kazakhstan, Uzbekistan, Turkmenistan, Iran and Turkey to Germany. The third would begin in the south-western city of Kunming and end in Singapore.

However, The Guardian reports:

No other Chinese railway experts have come out in support of the proposed project. Whether the government has consulted Russia, the US or Canada is also unclear. The Bering Strait tunnel alone would require an unprecedented feat of engineering – it would be the world’s longest undersea tunnel – four times the length of the Channel Tunnel.

What would it take for China to build a train to the US?

The longest undersea tunnel in the world is the Channel Tunnel, which runs under the English Channel for just under 25 miles. That train, opened in 1994, cost about $7.8 billion ($20.2 billion today). Today, the Bering Strait tunnel would cost approximately $35 billion.

Fyodor Soloview, an Alaska businessman, estimates that “the entirety of the Chinese high speed rail project from the Chinese capital of Beijing to the US capitol in Washington, DC would cost at least $2 trillion”.

China starts work on longest undersea tunnel in the world… to America. Now that will need some safety professionals! https://t.co/FkiffXljEG

Dr. Allan M. Zarembski, a professor and director of the Railroad Engineering and Safety Program at the University of Delaware, told The Week:

“The Chinese line would likely have to be built on permafrost, and cut through some pretty rugged mountain ranges. That brings environmental challenges like rock slides, snow, and flooding. But these technical and logistical hurdles can all be overcome. The real problem is that China is reportedly planning to make this a passenger train. If, for some reason, people decide to take a two-day train from San Francisco to Beijing, rather than a 12-hour flight, the economics are nonetheless an absolute disaster. There’s no way this could pay its way back.”

This Article (China Plans 8000-Mile High-Speed Train To America VIA 125-Mile Undersea Tunnel) is free and open source. You have permission to republish this article under a Creative Commons license with attribution to the author and AnonHQ.com.