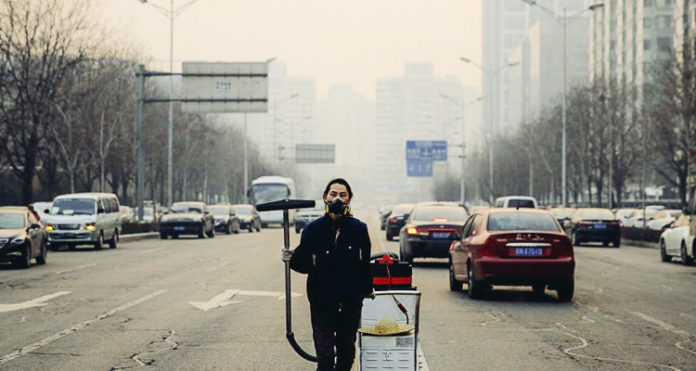 by Amanda Froelich at trueactivist.com

Nut Brother, a performance artist in China, vacuumed Beijing’s toxic air four hours a day, for 100 days in a row, to make a statement about the environment.

If you think your city’s air quality is poor, try living in Beijing, China. According to authorities in the communist country, the city’s pollutant levels have increased to over 40 times the level deemed safe by the World Health Organization’s (WHO) air quality index. That number represents levels of PM 2.5, airborne particulates smaller than 2.5 micrometers that are classified as carcinogens by the WHO.

To raise awareness about the issue, one activist, who goes by the nickname Nut Brother, vacuumed his city’s toxic air four hours a day, for 100 days in a row.

He wasn’t hoping to improve the city’s air; rather, he used his industrial-strength vacuum to turn the capital of China’s notoriously heavy smog into a brick. Nut Brother’s real name, for the record, is Wang Renzheng.

From Beijing’s hutongs (old lanes) to the Tiananmen Square to the Bird’s Nest’s national stadium, Renzheng diligently kept up with the task. Every day on his Sina Weibo account (link in Chinese, registration required), he noted the date, the weather, and his vacuuming area. The then added a photo he asked individuals lingering nearby to take.

Quartz reports that the 34-year-old performance artist first announced his plan to vacuum the dust from Beijing’s air in late July. Every day since, Nut Brother walked Beijing’s streets with his vacuum – oftentimes wearing a respirator mask – with the suction nozzle held high to collect the polluted air.

On November 30th, the 100th day of his project, he mixed the dust he collected with clay and transported it to a brick factory to make a semi-finished brick.

According to the activist, “Air in Beijing is bad all over. There’s no special supply of air.”

Inspiration to conduct this project hit in 2013 when Beijing’s “airpocalypse” sparked outrage in China. Wanting to make people think more about the environment and understand the “relationship between human and nature,” he allowed the idea to develop itself before pursuing the project.

By the end of the experiment, reports CNN, he had accumulated a mixture of “dust and smog” that weight about 100 grams. He says that adding that mixture to clay makes a brick that weighs “several kilograms” – not too different from ordinary one.

His aim was to make a point through environmental art, and he definitely succeeded. His activism has been shared on multiple media outlets.

But Brother hopes to give the brick to a construction site and make it part of a new building in Beijing. The poetic addition to the concrete jungle, he said, is “just like putting a drop of water in the ocean.”

It’s thought-provoking, to say the least.

This article (Chinese Activist Vacuums Beijing’s Air For 100 Days And Makes A Brick With The Pollution) is free and open source. You have permission to republish this article under a Creative Commons license with attribution to the author and TrueActivist.com