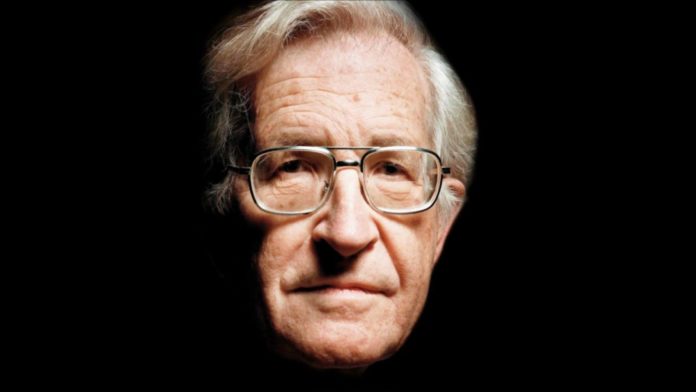 Outspoken political activist, historian, linguist, and philosopher Noam Chomsky has spoken out time and again about his concerns for humanity. The very survival of democracy and all that we stand for hinges on speaking out, standing up for our rights and critiquing loudly those who run our governments. His 1967 essay “The Responsibility of Intellectuals” rings true now more than ever.

In 2010, before Trump announced his run for presidency, Chomsky warned in an interview, that the “growing disillusionment, the justified anger and the absence of any coherent response” would pave the way for a “charismatic figure” to claim they have the answers and fill the void.

More recently, Chomsky has spoken out about the dismantling of climate policies, the rise of fascism and the American decline. Worried about the direction the United States is taking, Chomsky spoke candidly with Truthout about his perceptions of Donald Trump’s first few months in the White House and what it means for Americans and the world alike. He “presumes” everything is planned, not winged, but acknowledges Steve Bannon is the man to watch closely. “I don’t pretend to have any special insight into the mind of this strange person [Trump], though the people around him have been fairly coherent, in particular Steve Bannon, who seems to be the shadowed figure behind the throne.”

Chomsky almost likens the White House performances with something similar to the Kardashians; with “wild” performance after another, to the point the public won’t remember what last month’s headlines were, while behind the stage the real work of a fringe party takes place.

He talks about the current Trump administration undermining health care and climate change, boycotting science, cutting the budget to medical research, and the Department of Energy. The age of science-deniers is back, it seems, undoing years of research, dismantling fundamental projects and going so far as to place the “Senate’s leading climate denier,” James Inhofe in charge of the dismantling of the Environmental Protection Agency (EPA). “If God has decided to warm the Earth, so be it,” Chomsky satirizes Inhofe.

Chomsky on the Russia Leaks

But not all is a negative undertone against Trump. In fact, Chomsky sings his praises where they’re deserved and is quick to turn the spotlight on the Democrats and Obama’s call to support Israel’s invasion of Lebanon. He questions why they would be so quick to “extinguish” one of the few glimmers of hope Trump offers: peace with Russia.

“…the anger of the Democrats, whose primary concern in this affair seems to be to extinguish one of the few rays of light in the Trump performances, his indications of concern to reduce tensions with Russia that might well explode to terminal nuclear war,” Chomsky says.

He rationalizes that Trump’s fascination with Russia’s Putin isn’t truly about halting Islamization, because logic suggests Trump only needs to look at the European template, where the European majority prefers a complete Muslim ban on immigrants, something more radical than Putin’s Russia.

Chomsky calls out Trump on his anti-establishment policy, too. Why is it that the current economic policy and budget proposals are pro-elite, pro-military? The others are left behind to “fend for themselves,” he says. Those who voted for him are holding on to his promise of bringing back the jobs, but that aren’t jobs but more like profits for corporations.

Then there’s the possible scapegoating that Chomsky predicts as the veil falls and people comprehend the true nature of another political party. He worries about the possibility of a “friendly fascism” where minority targets fall victim to the conjured “threat to American security.”

But there is hope. Chomsky believes there have been worse struggles far harsher than those faced today. And with any challenge comes hope for a better future, aspirations and new opportunities.

You can read the full interview at Truthout here.

This article (Chomsky: Trump is Undermining Our Survival) is a free and open source. You have permission to republish this article under a Creative Commons license with attribution to the author AnonWatcher and AnonHQ.com.