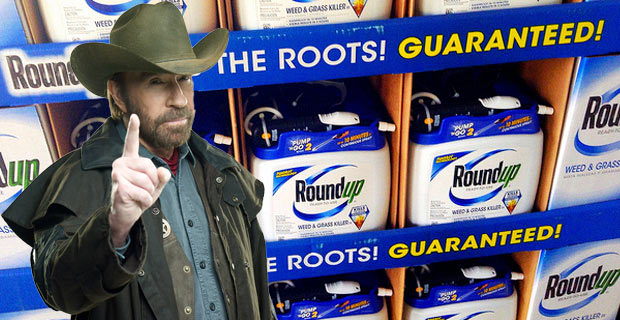 Chuck Norris is frustrated over the health risks caused by the world’s most popular weedkiller.

Earlier this year, the World Health Organization (WHO) deemed the chemical concoctionglyphosate, which is the main ingredient in Monsanto’s #1 weedkiller Roundup, to be “probably carcinogenic.”

While some countries scrambled to ban Monsanto’s herbicide shortly after the announcement, nations like the United States did nothing to prevent the further use and spread of the incrediblytoxic concoction.

Glyphosate has been linked to childhood brain cancer and Leukemia, but so far, only a few giant retail stores have made any effort to stop the sale of herbicides containing the concoction from further contaminating the food supply.

Chuck Norris is having none of that, however.

The majority of the populace in first-world countries like the United States might be more interested in Kim Kardashian’s butt than news concerning Monsanto, but it’s time the population wake up and realize that the food they eat is poisoning them and their future.

This is exactly Norris’ point in a piece titled ‘Chuck Norris Raises Red Flag Over Monsanto’which was published on World Net Daily earlier this year.

In the detailed open-letter, Norris calls out the greedy biotech corporation for decimating the food supply and treating the world’s farmers poorly. An excerpt of the letter – which mostly focuses on the harmful effects caused by glyphosate – follows:

“…Monsanto began marketing glyphosate under the Roundup name in the 1970s, and it quickly became an industry standard. In 1997, its use tripled with the introduction of Monsanto’s Roundup Ready crops, plantings genetically modified to withstand glyphosate in order to enable farmers to use more of the herbicide in killing crop-threatening weeds. Glyphosate is sprayed on most of the corn and soybean crops in the United States, as well as over sugar beets, canola and other crops.

… The only real way you have of knowing whether glyphosate traces or residue is in the food you eat is if you grow it yourself or only buy products that are certified organic.

The EPA promised a completed preliminary risk assessment of glyphosate by the end of last year.”

Similar to iconic music legend and activist Neil Young, Norris is done idly sitting by while bloated corporations continue to dupe unsuspecting consumers and poison the food supply. His letter, hopefully, will draw attention to the burgeoning crisis presently affecting all, and inspire consumers to stand up as one and urge Congress to ban glyphosate and the GM crops its sprayed so rampantly on.

This article (Chuck Norris Calls Out Monsanto For Poisoning The Food Supply) is free and open source. You have permission to republish this article under a Creative Commons license with attribution to the author and TrueActivist.com