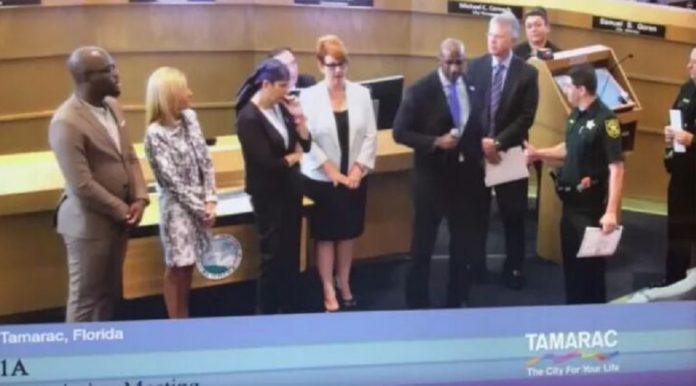 It was supposed to be a run-of-the mill ceremony honoring sheriff’s deputies in the southern Florida city of Tamarac. However, when one elected official decided to speak truth to power, it became far more memorable—and controversial.

Commissioners in the City Hall chambers began the day’s officiating with a brief presentation of certificates and accolades to deputies from the Broward County Sheriff’s Office who police the city, which lies roughly 15 miles northwest of Fort Lauderdale.

After the commissioners and Mayor Michelle J. Gomez took a group photo with the officers, one commissioner then took the microphone to address Deputy Joshua Gallardo. Mayor Gomez appeared visibly upset as Commissioner Mike Gelin gripped the mic, intent on delivering his own message to the ceremony.

Gallardo, who was named “April 2019 Deputy of the Month” for arresting a gang member from El Salvador who was wanted by Interpol for murder, had been basking in the city’s praise. But Gelin sought to clear up what he sees as the raw truth about the deputy. Beckoning the deputy to the front of the chamber, the commissioner said:

“Joshua Gallardo, will you come down for a second? It’s good to see you again.”

“You probably don’t remember me, but you are the police officer who falsely arrested me four years ago.

You lied on the police report.

I believe you are a rogue police officer.”

“You are a bad police officer, and you don’t deserve to be here.”

Gallardo, seemingly embarrassed, smiled and nodded as Gelin spoke, responding with a thumbs-up gesture in embarrassment before returning to his seat.

While Gelin spoke, his fellow commissioners seemed less than comfortable. One commissioner can be seen wincing while Mayor Gomez covered her mouth with her hand and looked down. An awkward silence gripped the chamber.

The mayor then took the microphone back before offering her own words:

“We appreciate as a whole BSO and everything you do for us.”

Gelin, who was elected to the city commission just last year, said that he hadn’t planned to confront the officer—instead, his words were extemporaneous and “in the moment” after seeing the deputy for the first time since his July 2015 arrest, reports New York Times.

The commissioner’s arrest, as he recounts it, resembles many of the other unjust incidents of police misconduct reported by people of color across the United States in an alarmingly regular manner.

Gelin, who is black, was at a Starbucks coffee shop before he saw two men fighting in the adjacent street. When he went to try and break up the fight, the street was filled with 15 to 20 bystanders and several officers.

As citizens are entitled to do, Gelin began recording the scene when Deputy Gallardo, who is white, began barking orders to stop. Gelin kept recording until Gallardo arrested him and charged him with resisting arrest without violence.

In records of the arrest obtained by BuzzFeed News, Gallardo claimed that a man wearing blue shorts and a blue t-shirt—later identified as Gelin—approached from behind while recording the incident with his phone.

“I advised the black male to move back, that this is a crime scene … He advised he was recording the incident and that he did not have to move.”

The deputy then alleged that Gelin stubbornly refused to comply after “repeatedly” being told to move back before he was arrested, booked, and jailed for nine hours.

The charges were later dropped when a judge saw what Gelin had recorded.

Because we know Commissioner Gelin is not the only person Deputy Gallardo improperly wielded his badge and gun over. And without something being done he's not gonna be the last.

“I was profoundly affected by my wrongful arrest.

It was a traumatizing experience and I think about it a lot. I had a flashback at the meeting and thought it was the right thing to do to call out the officer.”

While Gelin admits that he could have handled the situation better, he felt that the learning opportunity was necessary for the community in general. He explained:

“Wrongful arrests have lifelong impacts on people and happen more than people would want to believe.

I need to be a voice for the people who don’t feel like they have a voice or the courage to express their voice.”

After Gelin spoke out, Sheriff Gregory Tony met with him and promised to open an internal investigation into his arrest.

“I had a productive meeting with Sheriff Tony yesterday afternoon and we will move forward in a positive and constructive manner,” Gelin said after the meeting, according to Miami Herald.

The local sheriff’s union, as per usual, was furious about what they called an “insult to law enforcement.”

“It is outrageous that Commissioner Gelin acted in an official capacity to berate a deputy who was just recognized for apprehending a known gang member wanted for homicide who has previously been deported.”

The commissioner has received hundreds of messages since last Wednesday, including those brimming with racist hatred. He is also receiving generally supportive and grateful messages from communities of color, as well as broad support on social media, from those who know all too well what it’s like when the police misuse their power and subject innocent people to abuse under color of authority.

I stand 1000% w/ Commissioner Gelin. I’m reading folks describe it as a “score to settle.” The cop wrongly accused him and he had the opportunity to call him on it. He was supposed to shut up and let this cop get praised when he KNEW he had lied before? Dafuq is wrong with folks.