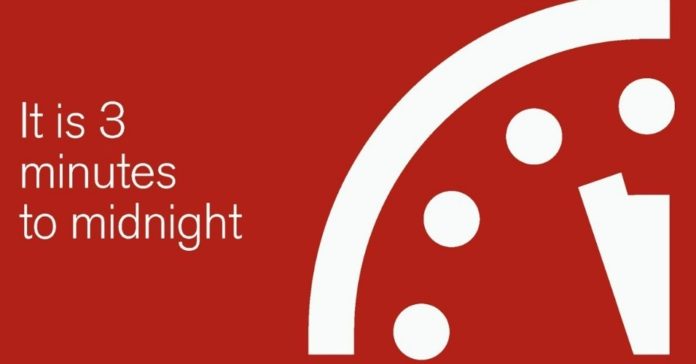 You have just gotten closer to doomsday…

The Bulletin of Atomic Scientists has moved the minute-hand of its iconic ‘Doomsday Clock’ up two minutes; the clock now stands at 11:57 pm.

“Today, unchecked climate change and a nuclear arms race resulting from modernization of huge arsenals pose extraordinary and undeniable threats to the continued existence of humanity. And world leaders have failed to act with the speed or on the scale required to protect citizens from potential catastrophe. These failures of leadership endanger every person on Earth. Based on their observations, the members of the Bulletin of the Atomic Scientists Science and Security Board find conditions in the world to be so threatening that they are moving the hands of the Doomsday Clock two minutes closer to midnight. It is now 3 minutes to midnight,” said Kennette Benedict, executive director of the Bulletin of Atomic Scientists, while breaking the news at an international conference in Washington. “We are not saying it’s too late to take action but the window for action is closing rapidly,” Benedict added. “The world needs to be awakened from its lethargy and start making changes. We move the clock hand today to inspire action and move that process along.”

Climate change, nuclear weapons and emerging technologies all figured into the Clock move.

The Science and Security Board explains here: http://t.co/VPWrxLZro2

@BulletinAtomic moves the #DoomsdayClock three minutes closer to midnight… but what does it all mean? https://t.co/MoZ3K8uvcN

These are the steps that the Board believes must be immediately taken to curb the threat and roll the clock back:

3. Re-energize the disarmament process, with a focus on results.

The previous time the minute hand was pushed was in 2012, from 11:54 pm to 11:55 pm. Since 2012, the clock had been fixed at 5 minutes to symbolic doom, midnight. The reasons given were lack of global political action to address global climate change, nuclear weapons stockpiles, the potential for regional nuclear conflict and nuclear power safety.

In an unusual move, the Bulletin of the Atomic Scientists directly addressed US President, Barack Obama, in an open letter in January 2013:

“2012 was the hottest year on record in the contiguous United States, marked by devastating drought and brutal storms. These extreme events are exactly what climate models predict for an atmosphere laden with greenhouse gases. 2012 was a year of unrealized opportunity to reduce nuclear stockpiles, to lower the immediacy of destruction from weapons on alert and to control the spread of fissile materials and keep nuclear terrorism at bay. 2012 was a year in which – one year after the partial meltdown at the Fukushima Daiichi Nuclear Power Station – the Japanese nation continued to be at the earliest stages of what will be a costly and long recovery. We have as much hope for Obama’s second term in office as we did in 2010, when we moved back the hand of the Clock after his first year in office. This is the year for U.S. leadership in slowing climate change and setting a path toward a world without nuclear weapons.”

And on January 22, 2015, the clock now stands at 11:57 pm. This time the reasons given are continued lack of global political action to address global climate change, nuclear weapon stockpiles, as well as increased tensions between the United States and Russia over the Ukrainian crisis. Ironically, 2014 was officially declared the hottest year on record. The average temperature was 1.1°F above the 20th century average. That edges 1998, the previous warmest year, by about 0.1°F.

The Bulletin of Atomic Scientists created the Doomsday Clock in 1947, using the imagery of apocalypse (midnight) and the contemporary idiom of nuclear explosion (countdown to zero) to convey threats to humanity and the planet. It then stood at 11:53 pm. In 1953, when the hydrogen bomb was first tested, the minute hand pointed at 11:58 pm – the closest to catastrophe. The farthest was in 1991, when the Cold War ended, the clock stood at 11:43 pm.