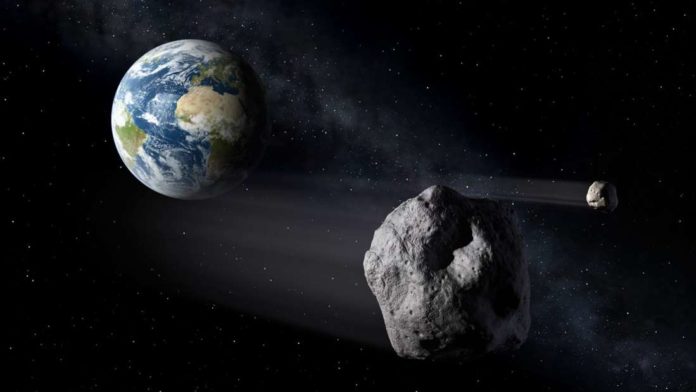 A highrise-sized asteroid, dubbed 2017 AG13, flew past the Earth at just half the distance separating the planet and its moon at 7:47 a.m. on January 9, but we barely saw it coming.

If the 10-storey (36 to 111 feet or 11 to 34 meters) long space rock, moving at 16 kilometers per second, had hit the Earth, it would have exploded with a force equivalent to about 35 of the nuclear bombs that destroyed Nagasaki.

While you were hitting snooze, we nearly hit an asteroid! At 7:47 AM EST an asteroid we only first spotted Saturday gave us a wake up call. pic.twitter.com/BbAQc7e2EJ

Using an asteroid impact simulator called “Impact Earth!” experts at Purdue University said that if a near-Earth object (NEO) the size of 2017 AG13 hit the Earth at a 45 degree-angle, it would likely have exploded high in the atmosphere releasing about 700 kilotons’ worth of energy. The atomic bomb detonated over Nagasaki on August 6, 1945, released 20 kilotons of energy.

According to Eric Edelman, an astronomer with the Slooh Observatory, 2017 AG13 was as large or even larger than the 65-foot wide meteor that exploded over the Russian city of Chelyabinsk in February 2013. That particular meteor caused a 5-foot fireball in the sky and injured more than 1,000 people on the ground.

We caught newly discovered asteroid 2017 AG13 as it made an extremely close approach to Earth this morning. It was closer than the Moon! pic.twitter.com/uKjWzGXmMA

2017 AG13, spotted by the scientists at the University of Arizona-based Catalina Sky Survey, only on January 7, was difficult to spot with available telescopes because of its relatively fast speed and a relatively low brightness level.

It was roughly half the size designed to be detected by NASA’s proposed NEOCam, an infra-red telescope surveying the sky for potentially damaging asteroids that have orbits intersecting with that of Earth’s. Mark Sykes, director and CEO of the Planetary Science Institute and one of the scientists behind the NEOCam, states:

“NEOcam will detect small asteroids slightly larger – about 460 feet (140 meters) – than asteroids in the 2017 AG13 size range earlier they hit Earth. Such asteroids are capable of wreaking serious local damage if they enter the Earth’s atmosphere over major residential centers.”

2 #asteroids to have a Near Earth Flyby #today
Asteroid 2017AG13 to have a miss distance of only .5 LD!! pic.twitter.com/4F1d1QwmKU

Last year, Paul Chodas, leader of NASA’s Center for Near Earth Object Studies, told Motherboard an 800-foot space rock, expected to collide with Earth in late September of 2020, could easily wipe out a city the size of Los Angeles:

“The air burst is the main hazard if the asteroid hit anywhere near land, which in this case would be equivalent to a 50 megaton explosion which would cause a large shock wave. It would be devastating for a region with a 40-50 kilometer radius around the impact point.”

Yet, according to Business Insider, NEOCam, a superior asteroid-hunting space telescope, last week received only partial funding from NASA to continue its search – because NASA preferred to invest in Lucy (which will explore swarms of asteroids in Jupiter’s orbit) and Psyche (which will fly out to and investigate the giant metallic core of a dead proto-planet).

Last month, the White House released a document (which was promptly  removed from the official White House website soon after Donald Trump became the 45th president of the United States) outlining a Near-Earth Object Preparedness Strategy.

The document, citing the 1908 explosion of an estimated 130-foot object that felled trees across hundreds of square miles in central Russia, warned that asteroids a little larger than the highest estimate for 2017 AG13 could cause serious problems.

“As with other low-probability, high-consequence hazards, potential NEO impacts pose a significant and complex challenge. This Strategy is a step in addressing the myriad challenges of managing and reducing the risks posed by both large and small NEOs.

“The seven high-level goals and associated objectives outlined in this Strategy support a collaborative and Federally-coordinated approach to developing effective policies, practices, and procedures for decreasing the Nation’s vulnerabilities associated with the NEO impact hazard.”

This article (Close Shave: Massive Asteroid Just Flew Past Earth, But NO ONE Spotted the Danger) is a free and open source. You have permission to republish this article under a Creative Commons license with attribution to the author and AnonHQ.com.