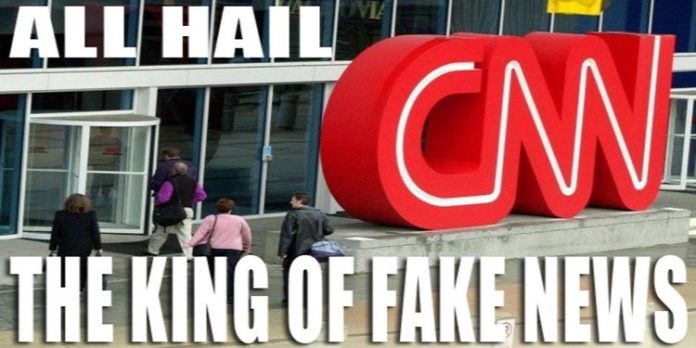 Donald Trump defeated Hillary Clinton in the United States presidential election. Shocked at the defeat, the Democratic Party and its media cabals in the West blamed the defeat of their candidate on so-called fake news disseminated about Clinton on alternative media via social media platforms.

When this unfounded allegation was made, major media outlets in the West, including the American Cable News Network (CNN) extensively discussed the issue. Many of these media outlets even called for the shutting down of alternative outlets on social media. However, there were some critical observers who said the headquarters of fake news is found in the mainstream media, and not alternative media. This is absolutely true. In fact, you don’t need to have a degree in journalism to know that the mainstream media is full of lies and misrepresentation of facts.

We have a clear example for you here. CNN has been caught with an untrue story about Ghana, a country in West Africa.

On Dec. 7, 2016, Ghana went to the polls to select its president and parliamentarians. After the votes were cast in the presidential election, the opposition party, led by Nana Akufo Addo had won. The incumbent party, led by John Mahama, accepted the outcome, calling to congratulate President-elect Akufo Addo. Some Western media outlets who had correspondents in Ghana, reported the outcome of the presidential election. CNN, without any correspondent in Ghana, decided to sit comfortably in their newsroom and file a report on the election.

In the report, CNN claimed that Ghanaians were starving to death due to a shortage of food in the country. It further said citizens of the country stand in long lines to obtain basic products. The report also misrepresented the date the opposition leader ran for president in the past. According to the report, Akufo Addo ran for president in 1998, 2008 and 2012, losing all. But this was completely false. In fact, Akufo Addo ran for office in 2008, 2012 and 2016, which he just won.  Above all, the word “Ghanaians” was incorrectly spelled.

My Ghana people. Shall we do something let @CNN know we are tired of their lazy reportage of our election? Tweet them with #CNNGetItRight pic.twitter.com/A4E7GY0fp3

While CNN was spewing these lies, it forgot that the rise of the internet and technology has turned the world into a global village. People around the world get information on the internet in real time. Immediately after the story was published on CNN website, many Ghanaians jumped on Twitter to express their dissatisfaction at the false CNN representation of their country.

Using the hashtag #GetitrightCNN, many Ghanaian and other African nationals slammed CNN for the fake news that misrepresented the actual conditions in Ghana. The factual errors in the report made it worst for CNN.

One Twitter user wrote: “I didn’t know Ghanaians ‘stand in long lines to obtain products’ or ‘struggle to obtain food’. And I live there.”

Fake News Media, @CNN with a completely unacceptable reportage on elections in Ghana. Who queues for food in Ghana? Smh! #CNNGetItRight

The same person also pointed out that CNN misspelled “Ghanaians,” saying: “At least, spellchecker on the PC of whoever wrote this should have pointed out the word ‘Ghanaians’ and NOT ‘Ghanians’.”

Another user corrected CNN on dates, telling the outlet that there were no elections held in Ghana in 1998, as the report claimed.

Other Twitter users said they were not surprised by the report filed by CNN. They revealed that it has been the ongoing view of CNN and other Western mainstream media, about Africa. They view all nations in Africa as the same — all poor, disease ridden, corrupt and destitute.

@CNN I shamelessly volunteer to report for you from Ghana for free.The misinformation in your reports from here are appalling.

These uproar on Twitter forced CNN to apologize to Ghana. The lies in the report were later corrected. The editor issued a note at the end of the report saying “An earlier version of this article incorrectly described the status of the retail economy in Ghana. Stores are generally well stocked, and food shortages are rare. The earlier version also erroneously said Nana Akufo-Addo ran for president in 1998. Ghana did not have presidential elections in 1998.”

What CNN published about Ghana is of course, not surprising. For years, this has been the narrative the Western media hold about Africa. Many news stories about Africa have been mispresented or faked by the media.

In January 2016, we published an article titled All is not Doom and Gloom in Africa, It is Just a Misrepresentation of Facts by the Media. In the article, we tried as much as possible to correct some of the false perceptions the media created about Africa to their audiences in the West.

Africa is not as bad as the Western media portrays it. Over the years, the media has carefully selected bad stories from Africa, making it salient in the news agenda. Therefore, be very skeptical about some of the things you read, listen or watch in the mainstream media. They are the real headquarters of fake news.

This article (CNN Caught Faking News About Ghana, Citizens Express Outrage Leading to Shameful Apology) is a free and open source. You have permission to republish this article under a Creative Commons license with attribution to the author and AnonHQ.com.