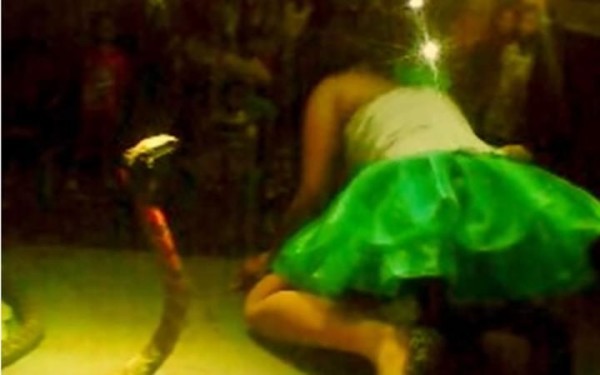 Local media outlets in Indonesia have reported the death of a pop music star, Irma Bule, who was bitten by a snake while performing live on stage.

According to the Jakarta Coconuts, the 26-year-old Irma was performing a musical genre known in Indonesia as Dangdut. Dangdut is sometimes performed by artists with fearful animals in order to make the show lively to the audience.

Irma is said to be known for bringing snakes on stage during her musical performances in the area. She had previously appeared on stage with pythons and boa constrictors. But unfortunately, on April 3 at the village of Karawang,  inWest Java, she met her untimely death.

Eyewitnesses said as part of Irma’s performance, she brought a snake known as king cobra on stage. The snake was still venomous and not defanged.

Then, as she was in the middle of the performance with king cobra, she accidentally stepped on the tail of the reptile which led to the snake biting her. It is said when it happened, Irma refused an antidote from the snake handler, thinking the snake was defanged.

An audience member of the show who witnessed the moment of the bite, Ferlando Octavion Auzura, told local website merdeka.com “The accident happened in the middle of the second song when Irma stepped on the snake’s tail. The snake then bit Irma on the thigh.”

As she refused medication and continued with the performance; about 45 minutes later she collapsed and started vomiting. The show was called off, and she was rushed to the nearest hospital for treatment.

“The effects were felt 45 minutes after the bite. She vomited, had seizures, and her body seized,” Ferlando added. She could not survive it. She was pronounced dead by doctors shortly after arrival.

Police officials have said although they have heard and seen video of the incident, they are still investigating the issue to determine whether there was a foul play in it.

In this amateur video uploaded online, it showed the moment the king cobra bit Irma, latching on to her for a while. A snake handler is then seen pulling the snake away after some time.

This article (Cobra Bites Pop Star to Death During Live Performance in Indonesia [Video] ) is a free and open source. You have permission to republish this article under a Creative Commons license with attribution to the author and AnonHQ.com.