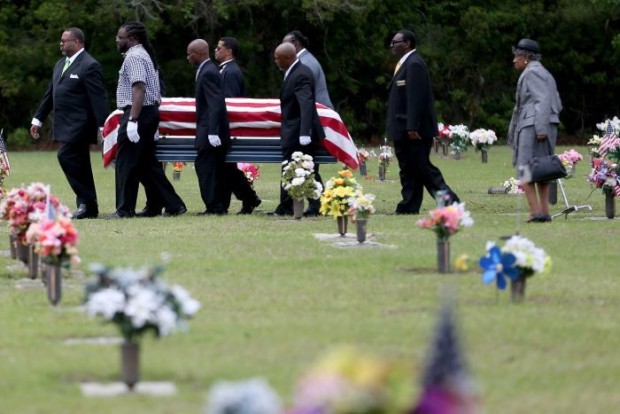 Walter Scott, a black man, was murdered by a white police office named  Michael Slager in broad daylight on April 4 in North Charleston-South Carolina, simply because the tail light of his car was broken. This situation has enhanced the belief of many black Americans that they have been criminally dehumanized over the years due to their skin color.

Black people are being targeted more aggressively by white police officers for minor infractions, as seen in the case of the broken tail light on Scott’s car. In 2012, statistics from the Center for American Progress revealed that blacks were “twice as likely to be arrested, and almost four times as likely to experience the use of force during police encounters.” The Bureau of Justice confirmed this also, saying that black drivers are about three times more likely to be stopped by police than white drivers.

We all still remember the Justice Departments’ report on the city of Ferguson. The damning report found that systemic overly-aggressive policing was responsible for municipal code violations, with blatant racial bias. The investigators said citizens of Ferguson had their constitutional rights violated through these processes. But we also know that despite these findings by the Justice Department, some activists known to work with Black Lives Matter are still being detained by police and charged with all sort of ridiculous offences.

What is happening in America today is that in high-poverty areas throughout the country, which are mostly inhabited by blacks and other minority groups, police, and especially white officers, have been especially aggressive. Observers say that the police do this with the express purpose of shoring up shrinking local budgets through fines and fees… Which was probably the officer’s very intention when he confronted Scott over his tail-light. In 2014, a US National Public Radio investigation found that fines and fees for misdemeanors have increased in 48 states since 2010. The intent is to subjugate Blacks and minorities by inundating them with fines, and if they fight back, bullets.

But for the African-Americans, it is just sad. They did not come to America because of free-will. Their forefathers were traded like commodities during the slave era from Africa. Now, a common broken tail light in their car can lead to their execution? This is not just a crime, it is heinous, it is atrocious, and it is unacceptable to the highest degree.

We are all waiting to see what will happen next. Had it not been for the fact that somebody had filmed the heinous killing of Scott, dust would have been thrown into our eyes and everyone would insinuate that he had threatened to kill the officer. As with so many other cases. But thanks to that brave young man who filmed the incident with his cell phone, we have a chance at justice.

This is a country that prides itself as the leader of the free world. Meanwhile, it cannot free its citizens from these unacceptable and senseless killings. That is American Hypocrisy for you.  That is the American system, as it had been created since the time of George Washington.