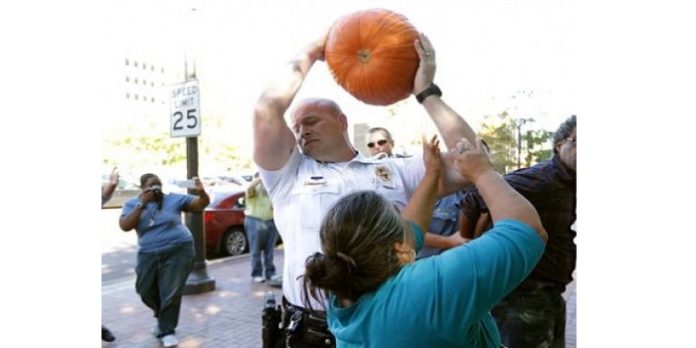 A Connecticut citizen was cited with multiple trumped up charges after filming cops, while protesting a DUI checkpoint. The American Civil Liberties Union of Connecticut filed a federal civil rights violation law suit on behalf of Michael Picard, an activist who often protests DUI checkpoints.

Picard was stopped as he was filming. The aggressive and under informed cop wasted no time in knocking Picard’s cell phone to the ground before confiscating it. “It’s illegal to take my picture,” Connecticut Trooper John Barone tells Picard several times.

“No it’s not. You’re on public property,” Picard attempted to inform the Trooper.

“Did you get any documentation? I say you can take my picture?” Barone asks.

In this day and age, you would think police would know that  the activists usually know the law better than they do. Barone is a perfect example of law enforcement who don’t bother to keep up with case law. As a trained professional, you would imagine that the Trooper would at some point have been informed of the numerous court rulings siding in favor of citizen journalists who choose to document police activity.

Barone heads to his cruiser, where he meets with two other officers. Patrick Torneo and John Jacobi were also named in the ACLU lawsuit. They actively conspired to put charges on Picard, when all he had done was film police while they worked. Barone couldn’t figure out the camera and tossed it onto the roof of his vehicle. He didn’t realize that it captured the next eight or so minutes, until it was too late. Once returning to his cruiser, he proceeded to ask his fellow conspirators what he could charge Picard with. One of the first things heard on the video was “we gotta cover our ass.”

While this seems like a horrendous act, it is hardly a rare event in the law enforcement community. As a former law enforcement officer, I have seen this more times than I can count. Cops often refer to it as going to jail for P.O.P., or pissing off the police.

Picard was also legally armed with a firearm, which is probably what caused them to continue their harassment. It didn’t help matters when Master Sergeant Torneo informed Jacobi and Barone that he recognized Picard from an open carry rally in Hartford. “Uh, let’s give him something.” That quote alone proves he was ticketed for being an activist and protester – not for any of the trumped up charges that he was cited for.

Sgt John Jacobi then states “It’s legal to do it,” obviously referring to his filming them that evening. Despite his knowledge of the law, Jacobi suggests they issue him a trespass warning and cite him for reckless use of the highway and creating a public disturbance.

The next part gets good. The cell phone video captured what will most likely end the careers of all Troopers involved. “and then we claim that, um, in backup, we had multiple people, um, they didn’t want to stay and give us a statement, so we took our own course of action.” This is known as criminal conspiracy. The blatant fabrication of information which typically would be un-confirmable, was captured for all the world to hear. Jacobi, who is a supervising Sergeant just said, “Ok.” The phone then falls onto the hood of the car as the officer drove off. Torneo gets out of his car and talks with Jacobi. “It’s still on.” This is when the panic sets in. You know this, because the two officers dicsuss leaving the phone there, instead of returning it to its rightful owner. They end up returning the phone to Picard with two citations. One citation was for pedestrian on a highway and the other was for creating a public disturbance by carrying a firearm in plain view of motorists.

Picard, however, had the last laugh. The nearly ten minutes of video saw all of his charges dropped or nolle prossed, another technical term for a refusal to prosecute. The public is very lucky in having seen this video. This is a routine police practice that is covered up by their creative articulation of facts in the police report that follows. Videos like this, peel back the veil on what really goes on behind the scenes in law enforcement. Why manufacture a charge against someone legally protesting a constitutional gray area? Because to the cop, it is personal. It is the cowboy-cop mentality that seems to prevail in these situations. Fortunately for Picard and the rest of us, this act of cowardice and bullying was captured for eternal preservation.

The internal affairs division of the Connecticut state Troopers is actively investigating the three officers involved. It will be interesting to see how they wiggle their way out of this one.

This article (Connecticut Troopers Caught on Video Fabricating Charges Against Protestor at DUI Checkpoint) is a free and open source. You have permission to republish this article under a Creative Commons license with attribution to the author and AnonHQ.com.