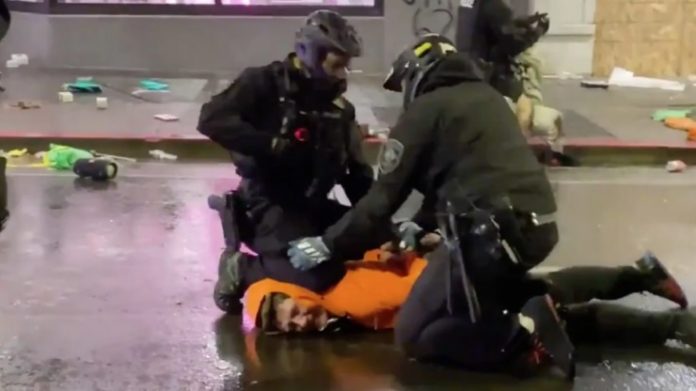 Video footage has emerged from the recent protests in Seattle, showing a police officer kneeling on the neck of a protester, in a very similar position to the one that killed George Floyd.

The altercation took place outside of a T-Mobile store that was being looted, and there were many bystanders to witness the police arrest someone who they suspected of being involved.

The onlookers continued to shout “Get your f*cking knee off his neck” and “Get your knee of his neck,” until finally, the second officer on the scene physically removed his partner’s knee from the protester’s neck.

While this is a common tactic that police use when they are subduing suspects, it isn’t actually an approved physical technique for any department in the US because there is a very high potential for injury and even death. Still, police seem to think that they can handle a person any way they want if they suspect them of committing a crime.

Sadly, bystanders in this situation usually feel powerless to intervene, and in most cases trying to do so would end up in them being arrested or assaulted themselves. In situations like this, where excessive force is being used, other officers on the scene have the most power to diffuse the situation and safely intervene.

In debates about police brutality, the trope that “a few bad apples” are responsible for this violence is often used to deflect from the systematic nature of the problem.

“A few bad apples spoil the whole bunch,” is the saying in its entirety, and this applies a bit better to the police problem that we face today.

One of the primary reasons that this police abuse has continued for so long is because these cops cover for each other regardless of the circumstances and they will rarely call one another out when they do something wrong.

There were three other officers on the scene when George Floyd was murdered by Derek Chauvin, and none of them decided to intervene.

They had nearly ten minutes to save Floyd’s life, and all that they had to do tell their partner to take it easy, and pull him away. Instead, they helped Chauvin press Floyd to the ground and they prevented any nearby onlookers from saving his life too.

Officers in some cities have decided to welcome the protesters instead of instigating them. According to Forbes, in Camden, New Jersey, and other cities, police have engaged with protesters peacefully and showed gestures of respect.

In Camden, police marched with a banner reading “Standing in Solidarity,” and seemed to join in with the crowd chanting “no justice, no peace.” In other jurisdictions, officers joined protesters, or “took a knee” outside of their departments in a symbolic act of solidarity.