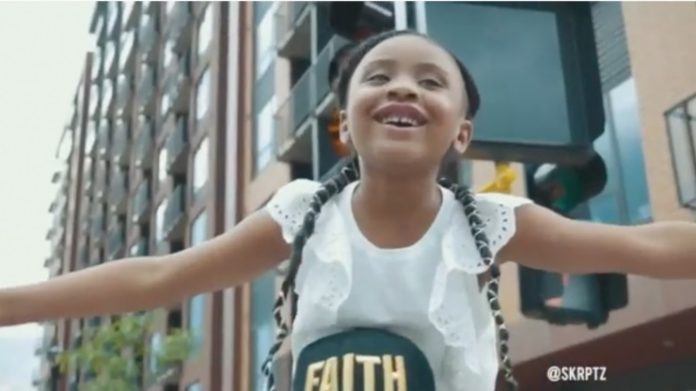 In a video recently published online, George Floyd’s daughter, Gianna can be heard saying that, “Daddy changed the world.”

In the video, Gianna is seen sitting atop the shoulders of her “uncle” retired NBA star, Stephen Jackson, who was one of Floyd’s closest friends.

The video went viral after it was shared on Twitter by Bernice A. King, the youngest daughter of Dr. Martin Luther King, Jr.

King said that she understands Gianna’s struggle, because her father changed the world, and unfortunately died doing it as well.

In a later statement, King said that she can relate to Giana’s pain, and was even bold enough to point out that her father was killed by law enforcement.

“I was five years old when my father was killed by law enforcement. I know that pain, I know that void, I know the journey of anger. I know what people are feeling. I feel it,” King said, according to The Grio.

During a press conference this week, Gianna’s mother Roxie Washington expressed her grief about how her daughter will now have to grow up without a father.

George Floyd’s death has already begun to change the world in just a little over week.

Never before has there been such a large movement against police brutality, and it has now become a global phenomenon. In cases of police murder, the officers involved rarely lose their jobs or face charges, and if they do, it usually takes a long time, since police departments often do their best to cover up the transgressions of their officers.

However, this time, all of the officers have been fired and are facing charges related to the incident. The officer directly responsible for Floyd’s death is facing murder charges.

Following the initial days of the protest, Minneapolis Public Schools announced that they were terminating their contract with the local police department.

The contract was worth over $1 million dollars, and put police officers in direct contact with children and teenagers on a regular basis, leading to many unnecessary assaults and arrests. Given how widespread these protests have become, it is highly likely that other parts of the country will follow suit with similar changes.

US lawmakers are also now pushing for monumental police reforms that seek to limit legal protections for violent cops, and strip police departments of their military equipment. The measures are being introduced or supported by both Republican and Democratic lawmakers.

People are more open to the idea of police reform than ever, and it is all because the case of George Floyd was so impossible to deny, excuse, and sweep under the rug as we have seen so often with police killings. Hopefully, real change can come in the aftermath of this tragedy.