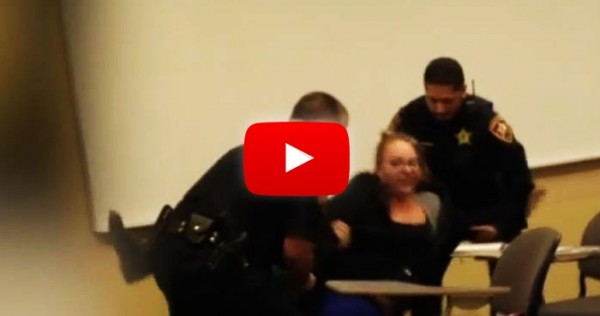 A video has emerged from the State of Illinois, United States in which two police officers were captured violently assaulting and arresting a college student for smoking cigarette with her friends during break time.

The Free Thought Project reports that on December 7 2014, Jaclyn Pazera stepped outside during a break between classes with several of her classmates from the College of DuPage to smoke cigarettes.

Then the first officer, indentified as Vallardes approached the group and gave them a verbal warning for smoking on campus.

The officer then asked Pazera and her classmates for identification. Pazera told him that she had accepted his warning, put out her cigarette, and began walking to class. Still not satisfied, Vallardes followed Pazera to her classroom and called for backup from another officer indentified as Tamurrino. When officer Tamurrino arrived, the two Officers reportedly entered the classroom and shouted at the teacher, “Is that your student?”, demanding that the teacher reveal the identity of Pazera.

The teacher informed the officers that the Family Educational Rights and Privacy Act prohibited him from revealing the names of his students. But that notwithstanding, Pazera showed them her student ID with her photo and expiration date visible.

After inspecting the ID, Tamurrino told Pazera that she was under arrest for trespassing. The officers then grabbed Pazera’s arms, violently slamming her to the ground. They then aggressively handcuffed her as she screamed in pain. The teacher and some students then began recording the incident with their cell phones. After the assault, the officers ordered that the recording done by the students be deleted, knowing that it could be used as evidence against them in a criminal trial. The officers also threatened to use their taser on the students if they did not obey their orders.  But the Officer never knew that the teacher also recorded the incident and that saved the situation for that video not to be deleted.

Pazera sustained injuries on her shoulder and wrist during the arrest. She was then taken away and later charged with obstructing peaceful officers and resisting arrest.

However, the charges were later dropped last month after the video of the incident was given to prosecutors. Pazera has now filed a civil rights lawsuit at a Federal Court against the college and the two officers for using excessive force during her arrest.

“I had two fully grown men on my back pushing me into the ground, and he said in the video, ‘If you can talk, you can breathe. He picked me up and slammed me into the ground harder.”  Pazera said about her ordeal.

DuPage College spokesman, Randall Samborn said after learning about the lawsuit “Student safety is of utmost importance to us. Of course, we will investigate to determine the facts and take appropriate action.”

But human rights activists say the College has had nearly a year to investigate the assault, and has done nothing to support their student who has suffered such an abuse. Pazera has not attended classes since her violent arrest.

According to the Free Thought Project, cops in DuPage are no stranger to controversy. In September this year, another video went viral on Social Media in which two students at the same College were seen on campus exercising their First Amendment rights by passing out pocket Constitutions and fliers that read “America is a free speech zone.” They were then approached by a police officer who threatened them with arrest for handing out the constitution to people.

This Article (Cops Violently Arrest College Student For Smoking Cigarette Outside Her Classroom [Video]) is free and open source. You have permission to republish this article under a Creative Commons license with attribution to the author and AnonHQ.com