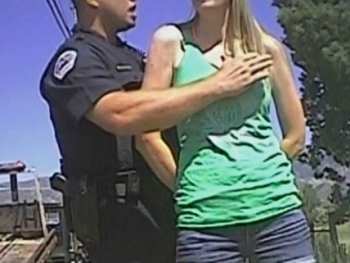 You call the cops for help after being struck in a car crash – you expect them to render aid, not take you to jail. This is exactly what happened to Amanda Houghton of Layton, Utah. After being struck from behind by another motorist and badly shaken up, she phoned 911 – as she was supposed to do. When the cops got there, they went from helping to fabricating charges, and sexually assaulting the victim. Dash cam video shows Houghton, who was injured and upset after being struck in her vehicle, led through field sobriety tests. Houghton is then searched in and around her breasts by the male officer, identified as Officer G. Schatzman. Houghton pulls away as Schatzman grabs her forcefully by the arm – the woman is obviously nervous and afraid. “I was shocked. Who arrests a sober person for DUI?” Houghton stated to the press. Instead of offering aid, Officer Schatzman treated Houghton like a criminal.

According to Schatzman’s report, Houghton demonstrated “odd behavior” and when spoken to, she gave “short quick answers to questions and she was speaking rapidly. Amanda was unable to stand still and seemed to be making jerky movements.” Officer Schatzman’s report includes vague descriptions that in no way accurately describe her behavior. Ofc. Schatzman saw an opportunity to exploit Houghton’s shock and make what he thought would be an easy arrest, despite the circumstances. If Schatzman truly believed that Houghton was DUI, the proper protocol would have been taking her to the hospital to be medically cleared. At that point, he could initiate a DUI investigation and request a blood test, due to field sobriety being no longer practical. None of this was done, instead Schatzman decided to charge an innocent woman and put his credibility on the line in the process. When Schatzman felt between and then grabbed under Houghton’s breasts, she pulled away, as any normal person would who was being assaulted. This would later result in a charge of resisting arrest.

“Don’t touch me!” she yelled as Schatzman began to feel under the wire of her bra. “I can search you,” Schatzman says. At this point, Houghton was handcuffed and posed no threat. Proper police protocol is to have a member of the same sex respond to conduct a search, but again, this failed to happen. Houghton was forced to take two blood tests. Both of which came back negative for any alcohol or drugs. Despite this, the police department is standing behind their officer and refusing to withdraw the DUI charge. According to Lt. Travis Lyman, Schatzman did everything “by the book.” If what happened is the typical way the department operates, perhaps it is time to get a new book. “That’s standard practice. Anytime someone gets arrested thy are going to be searched.”

Houghton has retained two sets of legal counsel, one for her criminal trial and one for the civil suit she is filing against the city. According to Houghton’s civil attorney Robert Sykes, “I think this amounted to an unconstitutional search of a woman without a necessity to do so.”

Schatzman’s rush to judgment is more indicative of the fact that he was in search of an arrest, rather than to help a victim in distress. He failed to follow standard DUI investigation protocol involving a crash victim and has opened up his department to civil liability; but this is just business as usual for police these days.

Houghton has a court day coming up, at which time she hopes the charges will be dropped.

This article (Crash Victim Calls Police for Help – Gets Arrested and Sexually Assaulted Instead) is a free and open source. You have permission to republish this article under a Creative Commons license with attribution to the author and AnonHQ.com.