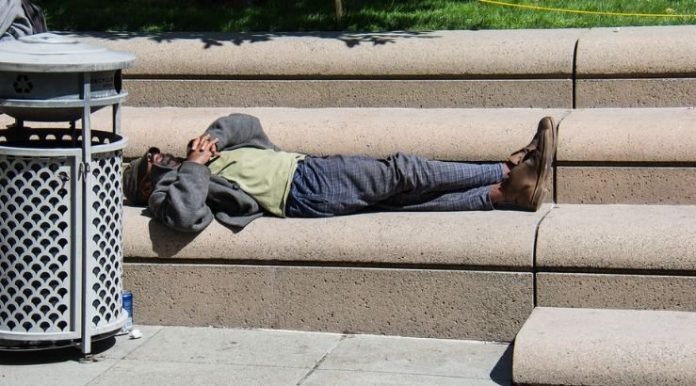 (TMU) — Across the United States, rising income inequality and surging homelessness is leading cities to introduce brutal measures meant to drive out people living on the streets. From hostile architecture like unneeded bike racks to “bum-proof” benches and spikes on every surface imaginable, cities large and small are doing all they can to make life literally unlivable for the already unfortunate indigent population left desperate for a bit of rest.

But now, officials in West Palm Beach, Florida, have devised possibly the cruelest means of dissuading the homeless from sleeping on city property: a never-ending loop of obnoxious, weaponized children’s songs including the infamous Baby Shark.

Leah Rockwell, the city’s Parks and Recreation director, told the Palm Beach Post that the goal is to prevent people from sleeping outside of the glass-walled Waterfront Lake Pavilion, a lavish rental banquet facility that can rake in around $240,000 per year from events, according to the Associated Press.

Songs on the municipal playlist include such dreaded earworms as the auto-tuned abomination Raining Tacos and the infamous Baby Shark, an old campfire sing-along which became viral after South Korean company Pinkfong produced a music video of the sticky, repetitive song.

Rockwell argues that event staff and customers attending weddings, business meetings, bar mitzvahs and birthday celebrations shouldn’t have to trip over homeless people when they leave events at the pavilion, which overlooks the town’s Great Lawn.

“People are paying a lot of money to use the facility. Thousands of dollars.

We want to make sure people paying this money had a facility that was clean and open and continue to use it in the future.”

The tactic brings to mind the use of blaring heavy metal music used by U.S. military interrogators to torture prisoners of war and terror suspects in Iraq’s dreaded Abu Ghraib, Afghanistan’s Baghram Air Base, and Guantanamo Bay or the 7-Eleven caught blasting a high pitched piercing sound to keep homeless people away.

In a statement emailed to CBS, a city spokesperson also confirmed that the music is being played on the Great Lawn during the day and night, but only as a “temporary measure.”

“Music is also played overnight on a loop by our pavilion to discourage congregating and, if appropriate, to encourage people to seek safer, more appropriate shelter through the many resources that are available.

The music volume complies with City code, and we are exploring the possibility of having set hours for the Great Lawn and pavilion.”

While the use of the music is planned as a temporary countermeasure against rough sleepers attracted to the facility’s patio, Rockwell hopes that the city will soon formalize hours for the facility to allow the police to enforce trespassing laws against houseless folks near the pavilion.

Illaya Champion told the Post that “it’s wrong” to use the music to chase people away, but he’ll sleep there regardless of the hazard, even if “it’s on and on, the same songs.”

The city’s choice of songs shows that officials have learned from the mistake committed by the City of Lake Worth, which previously attempted to drive homeless people from the town’s Cultural Plaza by blaring classical music. In that case, they ended up enjoying the classical tunes.