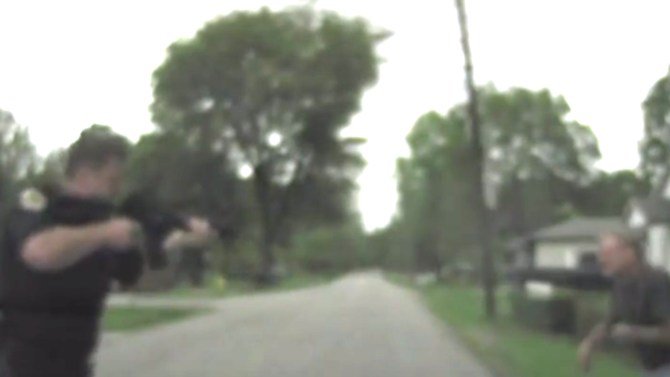 A Tennessee cop was found to have acted within the policies of his department when he shot a man fifteen times with an AR-15. According to the statements of Lt. Daniel Stephenson of the East Ridge Police Department, his victim, Todd Browning, charged at him with a knife. Despite not being armed with a knife and although it is clear that the statements of Browning charging at him were fabricated, there will be no discipline handed down. The dash cam video that was released shows Browning taking a few calm steps as the deputy rushed around the front of his cruiser. The shots were fired almost immediately upon the deputy seeing Browning. The initial call was for that of a man with a knife. The caller did not have all the information, yet police responded with overwhelming force. It was clear that Browning was in a state of emotional distress, a problem that police only seem to know how to handle one way. Lt. Stephenson, who was obviously caught up in a moment of extreme hyper-vigilance, didn’t care enough to determine what was actually happening. Instead, he chose to kill a man rather than solve a problem.

The department backed his decision to use deadly force and provided three justifications for his actions:

The first is not a justification, just a statement of fact, reiterating that only police can kill at-will. It is clear that Browning posed no threat to this heavily armed officer. The lengthy negotiation the investigative findings outline was a total of 45 seconds. Not long enough to have been classified as “lengthy negotiations,” yet certainly long enough for Lt. Stephenson to know that his subject was not in a right state of mind. Stephenson killed Browning because he wanted to, not because he felt threatened.

This is yet another case that hinged on Stephenson’s articulation of events. This is the single biggest reason cops are allowed to get away with murder. The art of creative articulation – in explaining and rationalizing indefensible events – is a practice that police are taught. Manipulation of the truth using pre-scripted catch phrases is what allows police to get away with murder. In this case, the slow-moving steps Browning took became “Browning charged at the officer,” in the final report. Despite the “investigation” that was conducted internally, it is likely that this case will end up in federal civil court.

This article (Dashcam Disproves Cop’s Story After Shooting Man Four Times with Assault Rifle – Still No Accountability) is a free and open source. You have permission to republish this article under a Creative Commons license with attribution to the author and AnonHQ.com.