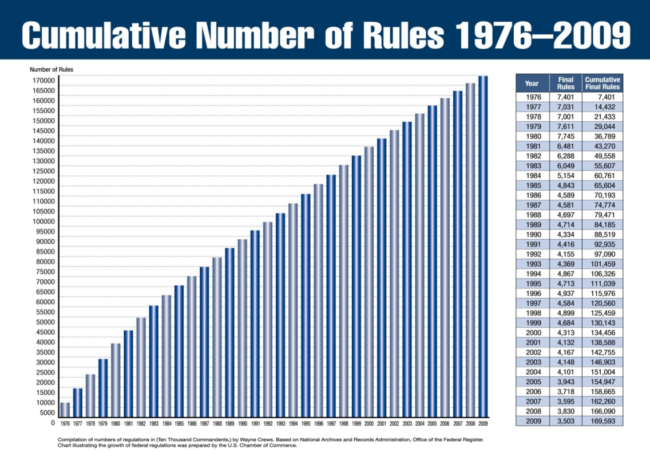 The study was conducted by the National Retail Federation between December 2015 and January 2016 consisting of 752 small business owners and found that the vast majority of small business believe their government is directly to blame for the decline of American businesses. Only 10% of participants believe the that the government is “helpful” towards business growth and 81% of owners believe that recent government regulations are “weakening the appeal of owning a business” and set people up for failure.

It is important to stress we are not talking about Walmart, or Goldman-Sachs or anything like this. This survey was conducted by small business owners, essentially your local stores or ‘mom and pops shops’. The survey point out that the fact that “America’s 28 million small businesses represent a staggering 99.7% of all U.S. employers. Of the nearly 3.8 million retail establishments in the United States, the vast majority of businesses (98%) have fewer than 100 employees and provide half of all private-sector jobs.” America’s small business sector is fundamental to the success of the economy and America’s middle class. This is exactly why this study is so important and why we need to reverse the trends we find here for the betterment of the country.

What people unfamiliar with the situation might not understand is that despite the rhetoric of Bernie Sanders, American businesses already operate under some of the highest tax rates in the entire world. To this point, 73% of respondents said they were concerned over the complexities of the tax code system. This is also why the United States has lost so many jobs to outsourcing over the years and why several companies such as Nabisco and Boeing are threatening to leave in the future. It is also the number one driving factor behind the fact that small business ownership in America has been significantly declining for nearly a decade now.

To these points the study found that 69% of business owners feel “overwhelmed by regulations, rules and mandates such as labor regulations, health care mandates, tax codes and safety guidelines.” Furthermore, another 24% of business owners “do not believe they are even aware of all the regulations affecting their business.” They have a very real fear that their business could be compromised by some small technicality that was never clearly defined.

As for what is the number one regulation negatively impacting American businesses? “More than half (64%) expressed concern about the Affordable Care Act” specifically as one of the single primary driving factors. Simply put, the Affordable Care Act puts a heavy burden on American employers by demanding they pay for employee health insurance if that person work full time hours for that business. As a result, despite the fact that President Obama has added more jobs to than any President in American history, there are 5.8 million fewer Americans working full time in 2015 then there was in 2007. Full time employees have been laid off all around the country in favor of more part time employees to fill the same hours. There are more total jobs because of the Affordable Care Act, but people are consequentially making less money whilst also having to pay for their own insurance now as a unintended consequence of new federal regulations such as this.

Despite the failing of the Affordable Care Act, according to business owners, Democrats are not entirely to blame. In fact 86% of participants believe that conservative ideology is more to blame for the expansion of federal regulations negatively impacting businesses more than liberals are. Small business ownership first started the gradual decline in 2006 whilst George Bush was in office. This was over the same time when Bush raised federal spending 60% from the end of the Clinton administration in addition to implementing several other expansive federal programs/regulations.

This article (New Study Investigates The Decline of American Business) is free and open source. You have permission to republish this article using a creative commons license with attribution to the author and AnonHQ. Joint he conversations at www.anonboards.com