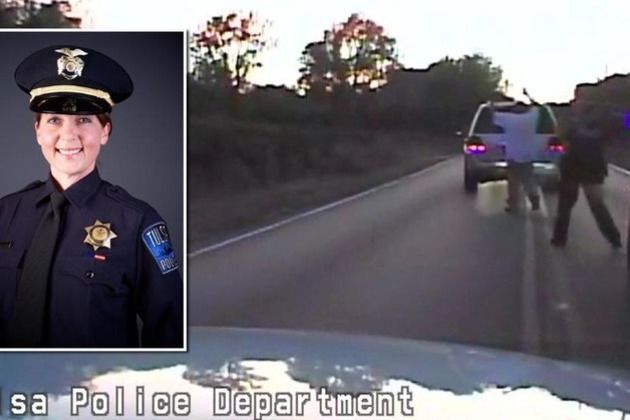 We have all seen the horrifying video of police officer Betty Shelby of the Tulsa Police Department, gun down, in a fit of panic, Terence Crutcher as he stood with his hands in the air. Immediately, the public took to the streets in outrage and within days, the state of Oklahoma found sufficient grounds for indictment for manslaughter. Despite being a murderer, the Tulsa Police Department is still cutting Betty Shelby a paycheck, with no end in sight. The police are in an unusual spot. They are conducting an investigation into an officer whom, the state has already concluded, has committed unlawful murder. The police have no obligation to make the same finding. While everyone saw the video and can recognize murder with their own eyes, the police have ways to bend reality to fit with their agenda. Betty Shelby is on paid administrative leave, pending the outcome of the investigation. In reality, the fact that she hasn’t been terminated already is a clear indicator of where the police are going with their investigation.

Betty Shelby’s trial will take years. As there is a pending criminal charge, there is no time limit as to how long the investigation could take. Police are typically protected by the “police officers bill of rights.” Within the bill of rights, police typically have to have discipline handed down within six months – or else they can’t be punished. Crazy right? In this case, as reason should dictate, Betty Shelby should have had her walking papers within a day of shooting Terence Crutcher. The fact she’s still catching a pay check at the tax payers expense, should tell everyone that the department will find her shooting justified. When police agencies want to fire you for an egregious act, they put you on unpaid leave pending investigation.  That’s not the case here. Betty Shelby is getting her full salary today, and most likely throughout the end of her trial. The shooting was murder, plain and simple. The District Attorney did the right thing in charging Shelby, however, he did so under pressure from the community, not necessarily because he believed Shelby was guilty. Based on the behavior of the Tulsa Police Department, you can make several predictions most likely to become true. The Tulsa Police are not going to conclude, or release any findings into the internal investigation until the trial is over with a verdict in place. If Shelby is convicted or takes a deal, she will most certainly have her employment terminated, never to work in law enforcement again. However, that’s not what will happen. The chances are more likely that the community will pity her, sympathize with her battle with the scary black man on pcp, and let her off. If that’s the case, you can guarantee that the Tulsa PD will find the shooting justified, placing her right back on the streets to murder again.

Police get fired all the time for the dumbest of reasons. Cops, this year alone, have been fired for watching movies on duty, playing Pokemon Go, and dozens of other ridiculous offenses. They seem to have no problem punishing officers for minor offenses, but when it comes to serious crimes, the blue wall of silence surrounds them. Recently, a police officer in Pennsylvania was fired for making a racist Facebook post using the ‘N’ word. The department had no problem rushing to the media to boast about how they quelled a racist in their midst, but if you murder a black man, you get paid vacation and a pat on the back. The blatant hypocrisy of the system seemingly goes unnoticed.

Police live in their own world and they look out for each other. Police believe that exposing corruption and misconduct will give law enforcement a bad name. What they don’t realize is, that by continuing to cover-up and make excuses for murderers, they mar their own reputation ten-fold. Betty Shelby has lied about Crutcher reaching into his car; she concocted a story about temporarily going deaf and has demonstrated to the world that she should never have held a badge. Betty Shelby needs to be terminated immediately, however, she will more than certainly be protected by the thin blue line.

This article (Despite Being Indicted for Manslaughter, Betty Shelby Keeps Her Job) is a free and open source. You have permission to republish this article under a Creative Commons license with attribution to the author and AnonHQ.