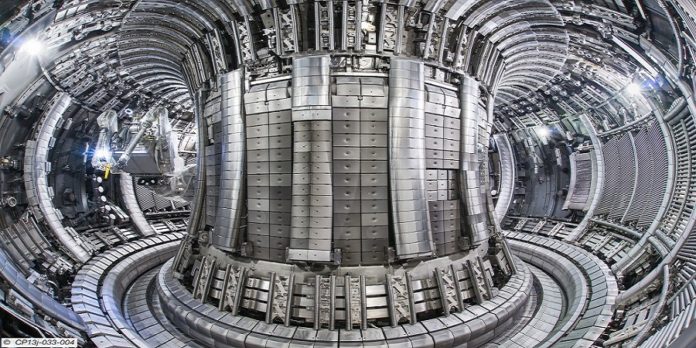 A group of Chinese scientists have just created a hydrogen gas that is three times hotter than the sun and lasts for 102 seconds.

Though this might not seem like too long, considering how long it would need to be powered to replace fossil fuels, it’s an amazing start in the right direction to solve the world’s energy crisis. A few days earlier, German scientists were able to engineer a hydrogen gas that managed to heat up to 80 million C, compared to the new 50 million C of the Chinese creation, but only lasted a fraction of a second.

The Chinese experiment took place at the Institute of Physical Science in Hefei, where nuclear scientists heated up hydrogen in a reactor called Experimental Advanced Superconducting Tokamak (EAST). The reactor produced hydrogen plasma, which is an ionized gas consisting of equal amounts of positive charged ions and negative charged ions.

The ultimate goal of the group is to mimic the solar nuclear fusion that occurs within the sun’s core, which converts hydrogen atoms into heavier atoms like helium. To do this, their first goal is to heat up the hydrogen to 100 million C, which is double the temperature they have created now, and maintain it for 1,000 seconds, which are the minimum conditions for mimicking a solar nuclear fusion. This fusion has been created before in nuclear bombs, but this amount of energy is uncontrolled and obviously dangerous, so the scientists are seeking a way to control this energy in order to use it for good.

Despite the destructive nature of nuclear bombs, nuclear energy is clean energy that the world could really use in order to stop the use of fossil fuels and instead produce unlimited nuclear energy to power their operations. According to Planet Save, fossil fuels are the major cause of climate change because of the huge carbon dioxide emissions. If we were able to one day replace these fossil fuels with nuclear energy, it is possible we could slowly repair the harm we have done to Earth so far, but the carbon dioxide will remain for decades, perhaps even centuries. This is why it is imperative that we develop alternative sources for energy as soon as possible, and these Chinese scientists are well on their way to doing just that.

This article (Did the Chinese Just Eliminate the Need for Fossil Fuels?) is free and open source. You have permission to republish this article under a Creative Commons license with attribution to the author and TrueActivist.com.