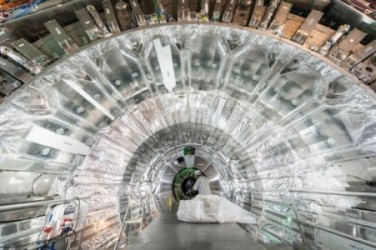 8,000+ people killed, nearly 18,000 injured and almost 400 are still missing two weeks after the April 25th earthquake in Nepal. Did our own people accidentally cause this debacle “in the name of science”? There’s a lot of finger pointing and theorizing going on about it right now. Read on and make your own decision.

Due to the fact that very few people know much about particle physics, let’s start with an extremely basic, non-detailed version of how a “super collider” works. Large amounts of electricity power electro-magnets that steer or bend (and accelerate) beams of protons (kind of like lasers) through an Ultra vacuum, in order to crash the particles together at velocities approaching the speed of light. Data is collected and used for assorted projects, experiments and other quandaries of the universe.

The Large Hadron Collider or “LHC” in Switzerland, operated by CERN (Conseil Européen pour la Recherche Nucléaire or European Council for Nuclear Research) uses 9,600 magnets to steer beams of protons as they travel at 99.99 percent the speed of light. It’s buried 100 meters underground at its most shallow depth and is in the shape of a circle… a circle 27 Km (17miles) in circumference.

So, how could a big, underground electromagnetic circle affect a mountainous little country 4300 miles away? Ask youself “when the scientists complete thier collision, what happens next?” Where does all that energy go? My fellow Anons… it’s not like turning off a light in your home. The beams don’t circulate inside accelerators forever. As particles slow down and collide with the sides of the beam pipe or with each other, the beams degrade and become less likely to give information that could lead to interesting physics. So the energy is then focused into what is called a “beam dump”. This beam dump is sort of like a vault buried even farther underground and is filled with materials designed to absorb and disburse this “beam  energy”. In the case of the LHC the “beam energy” needing to be absorbed in one, single instance equates to right around 4 Terrawatts. A little more than ¼ of our whole world’s energy usage is dumped at one time into an underground vault. Swirl that around for a minute…

This video put out by BPEarthwatch gives a bit more detail than I have space to write but a short description follows below.

On April 25th, 2015 scientists at CERN were starting the sequences to power up the LHC. The power capacities were brought up four separate times in the time before the earthquake in Nepal. Why 4 times? Does that mean the energy was dumped 3 times? I do not know. The video shows that, after fourth time, the beams initiated and then something caused a “Priority beam dump”, “a protection dump” and a “multiple systems dump”… all at nearly  the same moment the quake shook Nepal. Instead of using that energy for a collision, it was all injected directly into the ground. Was it on top of three other dumps? Did we push 16 TW of power into the ground to make a techtonic bomb? Is a far reach in thinking that all this energy just followed the path of least resistance starting at the Alps and working its way through mountain ranges to the head of the Himalayas until it hit a pressure point? The list of unanswered questions goes on and on.

More importantly… will any of the “super intelligent” dwellers of our world even try to make a connection?

I encourage you to watch the video. What are YOUR thoughts on the whole situation?