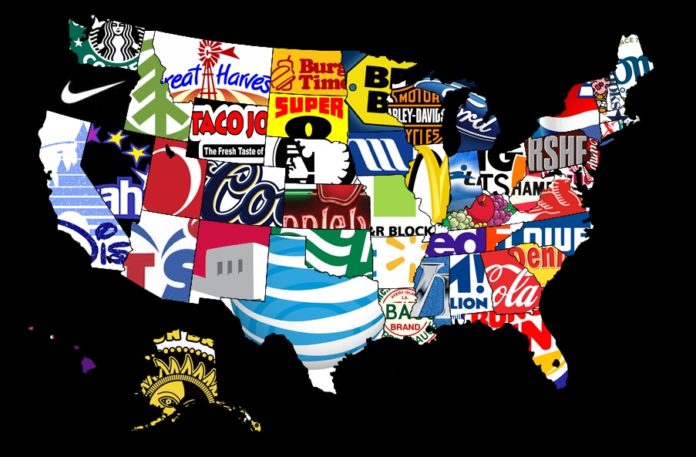 It is a distorted belief that corporations and wealthy individuals are job creators, and this belief has led to sizeable business subsidies and tax breaks. What’s more alarming, as Paul Buchheit from Alternet points out, is that the biggest giveaway is often overlooked or unappreciated: “corporations use our nation’s plentiful resources, largely at no cost, to build their profits.”

The Business of America

“The chief business of the American People,” said Calvin Coolidge, “is business.”

Corporate-America began with the railroads around the time of the Civil War. These early corporations were the most powerful in the U.S., and their power grew throughout the 1800’s. However, it was during the 1920’s that the corporate-America we know today, with its flamboyant advertisements and emphasis on indulgence, really took off.

America had rarely seen such dramatic economic growth or cooperation between business and government as they did during the Roaring Twenties. World War I was over, and after the recession that lasted into 1922, the U.S. was making a speedy recovery. There are many reasons for the recovery, including the automobile—which was the backbone of economic growth—however it was also during this time that American multinational corporations extended their sway throughout the world, and the dollar replaced the British pound as the most important currency of international trade.

In the States, citizens were encouraged to spend as much as possible, and from the outside looking in, it seemed things were, in fact, going well. This image was exemplified by Hollywood which spread films portraying images of “the American way of life”.

Numerous firms established public relations departments after WWI aimed at justifying corporate practices. They also worked to counteract the public’s long standing distrust of big business. According to historian, Eric Foner, these firms, as one advertising magazine put it, were meant to “sway the minds of whole populations,” and they succeeded in changing popular attitudes towards Wall Street.

During WWI, the government whipped up mass hysteria which undermined the foundation of democratic thought—the idea of the rational, self-directed citizen—and many began to believe the average American was mentally unfit for self-government. This included advertisers, as one executive stated, “The great bulk of people are stupid,” (Foner, 2014, p. 778).

Writer Walter Lippmann (1889 – 1974), author of Public Opinion and The Phantom Public, refused to believe a mass democracy was capable of applying “intelligence” to social problems. Lippmann claimed the average American was ill-informed and prone to fits of enthusiasm, and that the independent citizen was no more than a myth.

As with advertising copywriters and journalists, Lippmann knew the government had perfected the art of creating and manipulating public opinion. He called this process the “manufacture of consent”.

“The American citizen’s first importance to his country,” declared a Muncie, Indiana newspaper, “is no longer that of a citizen but that of a consumer.”

The economic growth of the 1920’s wasn’t felt by everyone, and signs of an economic crash began to show in the early part of the decade, but most seemed content to ignore these warning signs. The government belief was that if consumers continue to consume, the economy would pick back up. It had the opposite effect—to put it simply—as the crash of 1929 proves, and yet, this is where today’s corporate-America has its roots.

Fast-forward to the 1950’s and the consumer culture and corporate growth are painfully evident, fed all the more by America’s hatred of communism. Capitalism, and the mass goods it provided, were considered everything that communism wasn’t.

This consumer culture was thought of as a form of American “superiority”, and was meant as an assault against communism. Foner claims that from Coca-Cola to Levi’s Jeans, American goods that had once been considered a luxury for the rich were now available to nearly everyone in the world, and thus corporate-America branched out.

“The consumer is the key to our economy,” stated chairman of the board of Macy’s, Jack Straus. “Our ability to consume is endless. The luxuries of today are the necessities of tomorrow.” Today, as many of us know, corporations all but run the world, and if anything, their advertising practices have only gotten more aggressive, as is evident in this photo of New York Times Square: And yet, as the consumer ads that urge spending for corporate profits are shoved down our throats at every turn, many are starting to look closer at the facts. Aside from the obvious reasons corporations owe us—big time—there are several other “factual and well-established reasons why corporations owe a great debt to the nation that has made them rich,” says Paul Buchheit.

Our Tax Money Pays for Much of the Research

Buchheit points out that 57 percent of basic research, “the essential startup work for products that don’t yet yield profits,” is paid for with American tax dollars. He continues that when all the forms of research are included—that’s basic, applied, and developmental—approximately 30 percent comes from the public. He says that in 2009, universities that did research into science & engineering were receiving ten times more funding from the government then they were from industry itself.

According to U.S. Against Greed:

“There’s virtually no end to the public resources used at little or no cost by corporations. All the technology in our phones and computers started with government research at the Defense Department, the National Science Foundation, the Census Bureau, and public universities. The Internet made possible the quadrillion-dollar trading capacity of the financial industry. Pharmaceutical companies wouldn’t exist without the National Institutes of Health.”

“Corporate profits are at their highest level in 85 years, doubling in the last ten years, and growing by 171 percent in the first half of the Obama presidency.”

Even though productivity has grown tremendously in the last 35 years, wages have fallen dramatically, and continue to do so. Another problem is that technology is diminishing the need for warehouse workers, bank tellers, cashiers, travel agents, and many other middle-income positions.

In a report from The Economist:

“Robots don’t complain, or demand higher wages, or kill themselves.”

Corporations Use Our Resources but Avoid Their Taxes

According to Buchheit, “over half of U.S. corporate foreign profits are now being held in tax havens, double the share of just twenty years ago.” Buchheit obtained this information from Bloomberg Business, and according to the report, these “inversions” are most often the final step in a series of tax dodges.

The Wall Street Journal reported that over 75 percent of the cash owned by foreign subsidiaries remains in U.S. banks, “held in U.S. dollars or parked in U.S. government and corporate securities.”

Buchheit has researched into numerous corporations that avoid taxes, including:

– Apple, who moved $30 billion in profits to an Irish subsidiary with no employees.

– Google, who has gained recognition as one of the world’s biggest tax avoiders.

– Walgreens (which later backed out), Burger King, and Medtronic, the biggest names in the “inversions” that allow companies to desert the country that made them successful.

– Microsoft and Pfizer, who owe a combined $50 billion in taxes on profits that are being held overseas.

– Warren Buffett, which heads the company Berkshire Hathaway, made a $28 billion profit in 2014, yet claimed a $395 million tax refund.

Corporations Have Stopped Investing in America

In a recent statement by an Apple executive, “The U.S. has stopped producing people with the skills we need.”

And the problem is, corporations are spending money on themselves rather than investing in job-creating research and innovation. In 1981, major corporations spent less than 3 percent of combined income on investor-enriching stock buybacks, whereas an incredible 95 percent was spent in 2014.

“Buybacks are not only a reflection of corporate greed, but possibly also of criminal behavior. Buying back stock was considered a form of illegal stock manipulation until the Wall-Street-connected chairman of the SEC made it ‘legal’ during the Reagan administration.”

A Progressive Solution: Dividends for All

Buchheit suggests a solution proposed by Peter Barnes in his book, With Liberty and Dividends for All. Barnes argues for a system where all Americans receive a dividend of our co-owned national wealth. Since corporations use our resources—research, infrastructure, environment, educational and legal systems—to develop technologies that are taking human jobs, and because we, our parents and our grandparents, have all contributed to our national productivity, we deserve a cut of the profits.

“The sum of wealth created by nature, our ancestor, and our economy as a whole is what I here call co-owned wealth. Some, including myself, have called it shared wealth, the commons, or common wealth. Whatever we call it, it’s the goose that lays almost all the eggs of private wealth,” states Barnes.

The Alaska Permanent Fund serves as an example that such a system could work. According to Barnes, a system such as this on a nationwide level could mean an extra $5,000 a year for the rest of us. This concept, as Buchheit points out, is fair, manageable, and based on precedent. Should a system such as this be utilized, it would provide a little additional cash to those who could use it, and the corporations would still be profiting from the goods people buy with this extra cash. It’s good business.