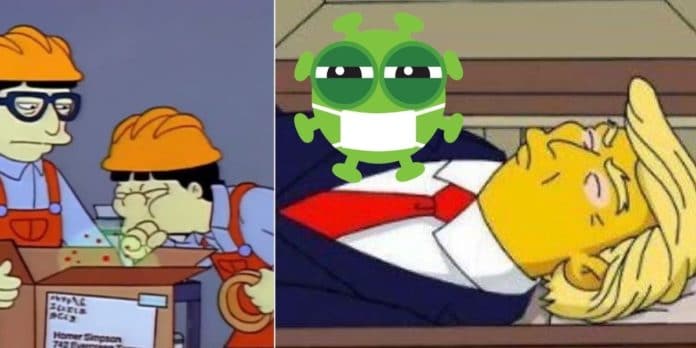 Centuries ago, we had Nostradamus. And now we have The Simpsons.

But just because the show, which has been running for decades now, has managed to get a few things right over the years (like US President Donald Trump’s election. Or even the coronavirus pandemic), it does not mean that every incident that occurs can be traced back to The Simpsons.

For the past few days, photos that have flooded Twitter seem to suggest that The Simpsons had predicted that Donald Trump would die on August 27. The photo showed an animated Trump lying in a coffin and is sure to convince any viewer that it is from one of the show’s episodes. Of course, that did not happen.

However, the photo is fake and The Simpsons made no such prediction.

A journalist with NY Times, Taylor Lorenz, took to Twitter to explain what happened. In June this year, a woman created a TikTok video in an attempt to satirise conspiracy theories and said that something important was about to happen on August 27. Her video, strangely, made no comment about Donald Trump, let alone his death.

The video quickly went viral and somehow ended up being associated with the morphed photo of Trump in a coffin.

If you’ve seen everyone on TikTok referencing August 27th and are wondering what’s happening on August 27th? What is this? Let me quickly explain. It all started 5 days ago when this girl stfusamantha posted this vid pic.twitter.com/GuoVskAM3g

While this did turn out to be fake, The Simpsons has, as a matter of fact, predicted events accurately before.

In 1993, the show aired an episode which may have predicted the pandemic. The episode titled “Marge in Chains” (Season 4, Episode 21) shows a mysterious virus from Asia invading the town of Springfield. The virus starts in Japan, where a sick factory employee in Japan sneezes into numerous packages containing juicers, that multiple people in Springfield buy – and on opening the packages, contract the disease.

The symptoms of the virus, which is called the ‘Osaka Flu’ turn out to be eerily similar to today’s coronavirus crisis – all symptoms of the common flu. Too much of a coincidence?