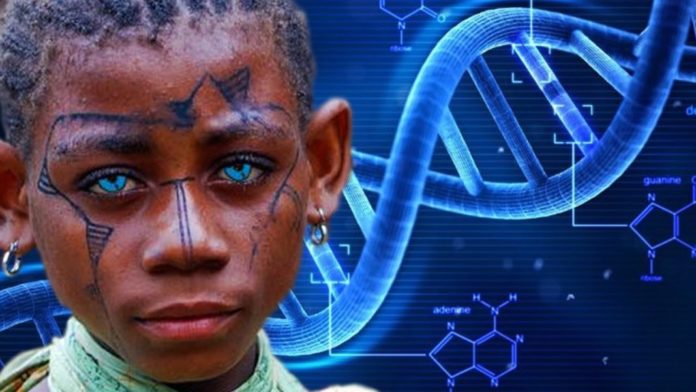 About 12 million residents residing on the remote equatorial island groups of Melanesia (a region that extends from the western side of the eastern Pacific to the Arafura Sea, north and northeast of Australia and contains 2,000 islands including Papua New Guinea, Fiji and the Solomon Islands) carry traces of a third, unidentified extinct human species.

A team of researchers from the University of Texas MD Anderson Cancer Center, and the University of Utah, have revealed that the genome of aboriginal Australians and Pacific Islanders retains traces of the Denisovans to an extent similar to the presence of Neanderthal genes in Europeans or Asians.

According to new human DNA research conducted by Dr. Ryan Bohlender, a statistical geneticist at the University of Texas MD Anderson Cancer Center, traces of long-lost human cousins may be hiding in the DNA of indigenous people living in Australia and Melanesia.

At the annual meeting of the American Society of Human Genetics, Bohlender reported that the previously unidentified extinct hominid species is probably not Neanderthal nor Denisovan, but a different, yet related, hominid group. This mysterious species is probably from a third branch of the hominid family tree that produced Neanderthals and Denisovans, an extinct distant cousin of Neanderthals. Scientists were either “missing a population” or “misunderstanding something about the relationships,” he added.

“We’re missing a lineage, a branch of this tree that we’ve assumed has four populations on it: two archaic and two modern. One possible explanation for why the model doesn’t work is that one of the branches that we’re missing is another archaic population.

“I think it’s important to keep in mind that we’re not specific about what the model doesn’t include, which is the possibility that there was another important modern population. There was a paper a couple of weeks ago that found results that indicated there might have been an earlier migration wave, and that could also affect our results.”

While investigating the percentages of extinct hominid DNA that modern humans still carry today, Bohlender and his team found discrepancies in previous analysis. Using an estimation tool to figure out the amount of Neanderthal and Denisovan DNA carried by modern humans, Bohlender and his team found that people of European and Asian descent carry about 2.8% Neanderthal DNA, while people of African descent carry no Neanderthal DNA. Likewise, Asians carry around 0.1 % Denisovan DNA, while Europeans carry no Denisovan DNA. But 2.74% of the DNA in Melanesians comes from Neanderthals, while Denisovan DNA accounts for 1.11% of their DNA and not the 3% to 6% estimated by previous researchers.

The unusually high levels of Denisovan DNA, and the fact that it’s not a direct match to that of the Siberian sample, led Bohlender and his team to conclude that a third group of hominids had bred with the ancestors of Melanesians.

“The sequencing of complete Neanderthal and Denisovan genomes has provided several insights into human history. One important insight stems from the observation that modern non-Africans and archaic populations share more derived alleles than they should if there was no admixture between them. We now know that the ancestors of modern non-Africans met, and introgressed with, Neanderthals and Denisovans.”

Bohlender’s analysis is supported by an earlier study that sequenced the genome of 83 Aboriginal Australians (speakers of Pama–Nyungan languages) and 25 Papuans from the New Guinea Highlands. According to the most comprehensive genetic study of Indigenous Australians to date, Aboriginal and Papuan ancestors left Africa around 72,000 years ago, split from the main group around 58,000 years ago, and reached the supercontinent of Sahul (which originally united Tasmania, mainland Australia and New Guinea) around 50,000 years ago, picking up the DNA of Neanderthals, Denisovans and a third, unidentified, extinct hominid along the way.

Study co-author Eske Willerslev, an evolutionary geneticist at the University of Copenhagen, told The Guardian:

“This story has been missing for a long time in science. Now we know their relatives are the guys who were the first real human explorers. Our ancestors were sitting being kind of scared of the world while they set out on this exceptional journey across Asia and across the sea.”

Since the human family tree is more complicated than we think it is, since our relationship with the Denisovans is less researched, and since the findings actually bring more questions than answers (including to what extent the new estimator can be trusted, why it produces results that differ from prevailing estimates, and how to reconcile these differences), Bohlender and his team plan to try out simulations with multiple other populations to see if this adds some clarity to the results.

This article (DNA of Mysterious Extinct Human Species Discovered in Modern-Day Melanesians) is a free and open source. You have permission to republish this article under a Creative Commons license with attribution to the author and AnonHQ.com.