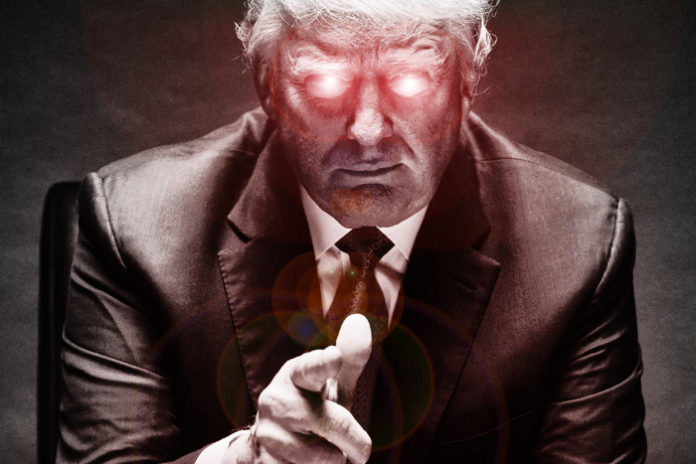 It’s been less than a month since Donald Trump took the oath of office, yet the 45th president of the United States is already frustrated with the challenges of trying to run the government like his family-owned business.

According to nearly two dozen White House insiders interviewed by Politico, “his mood has careened between surprise and anger as he’s faced the predictable realities of governing, from congressional delays over his cabinet nominations and legal fights holding up his aggressive initiatives to staff in-fighting and leaks.”

Trump, who lost the popular vote in the 2016 U.S. presidential election by a bigger margin than any other American president in history, lost his mind on Twitter after he lost a court battle over his two-week-old executive order banning refugees and immigrants from seven Muslim-majority countries from entering the United States.

“Donald Trump is dangerously mentally ill and temperamentally incapable of being president.  He has “malignant narcissism”, which is different from narcissistic personality disorder and which is incurable. It’s obvious from Trump’s behavior that he meets the diagnostic criteria for the disorder, which include anti-social behavior, sadism, aggressiveness, paranoia and grandiosity.”

Although Gartner broke the Goldwater Rule by giving a professional diagnosis of a public figure without personally examining the person, he says the Trump case warrants breaking that ethical code.

“Trump’s personality disorder (which includes hypomania) is also displayed through a lack of impulse control and empathy, and a feeling that people don’t recognize their greatness. We’ve seen enough public behavior by Donald Trump now that we can make this diagnosis indisputably.”

“Malignant Narcissists will go to great lengths to achieve their aim.  They can be intelligent, high functioning (hold an important job for example) soft-spoken, charming, tearful/seemingly emotional, gracious, well mannered, kind and have the ability to form relationships. They may lie, falsely accuse, dramatize, smear, cheat, steal, manipulate, accuse, blame or twist to get what they want and feel justified in doing so.

“Because they are entitled, egocentric and desperate, they do not experience it as wrong. They are determined to gratify their wishes and furious if thwarted. Their desire can be so consuming that there is little comprehension of, respect for or ability to empathize with the other.  They lack guilt or remorse and tend to feel or pronounce that it is they who have been mistreated. They can be of any gender, race or social class.”

For the past few weeks, psychotherapists in the U.S., alarmed by the rise of the ideology of Trumpism, have come forward to warn the public about the rise of an American form of fascism. Dr. Julie Futrell, a clinical psychologist in New York, told The New York Daily News:

“Narcissism impairs his ability to see reality. So you can’t use logic to persuade someone like that. Three million women marching? Doesn’t move him. Advisers point out that a policy choice didn’t work? He won’t care. The maintenance of self-identity is the organizing principle of life for those who fall toward the pathological end of the narcissistic spectrum.”

This article (Donald Trump is Dangerously Mentally Ill, Discloses Johns Hopkins’ Psychologist) is a free and open source. You have permission to republish this article under a Creative Commons license with attribution to the author and AnonHQ.com.