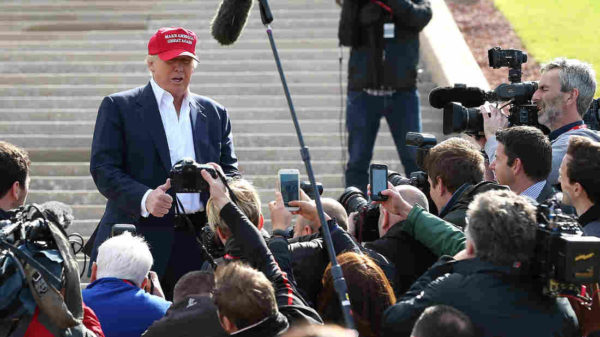 In the wake of the mass shooting at a gay night club in Orlando, Florida, which claimed 49 lives and injured 53 others, many people, including politicians in the United States have expressed their opinion on the tragic incident.

One of these politicians is the presumptive Presidential nominee of the Grand Old Party, Donald Trump. In the opinion of Trump, the shooting occurred because of weak leadership in the United States. Both on social and mainstream media, Trump tried again to tag the incident with Islam, justifying what he said in the past: that all Muslims should be banned from entering the United States.

From his anti-Islam rhetoric, Trump jumped at President Obama, criticizing him heavily for the shooting. In an interview with Fox News on June 13, a day after the shooting, Trump stated that when it comes to fighting terrorism, President Obama “doesn’t get it or, or he gets it better than anybody understands.”

Writing a news story out of the interview, the Washington Post published the story titled “Donald Trump seems to connect President Obama to Orlando shooting.”

The headline of the story infuriated Trump. Trump accused the Post of deliberate twisting of what he said on Fox News. Trump said he is not a fan of President Barack Obama, but the post reporting that he [Trump] said Obama was involved in the Orlando shooting is out of place and the highest form of irresponsible journalism.

Trump then directed his campaign team to revoke the credentials given to the Post for his campaign coverage. Trump wrote on his Facebook page: “Based on the incredibly inaccurate coverage and reporting of the record setting Trump campaign, we are hereby revoking the press credentials of the phony and dishonest Washington Post.”

In response to Trump’s action, editor of the Post, Martin Baron said in a press statement that Trump’s decision to revoke the paper’s press credentials is nothing less than a repudiation of the role of a free and independent press. Baron said it is unfortunate that Trump has taken such a decision, and that the Post will continue its honest and fair coverage on Trump.

“When coverage doesn’t correspond to what the candidate wants it to be, then a news organization is banished. The Post will continue to cover Donald Trump as it has all along honorably, honestly, accurately, energetically, and unflinchingly. We’re proud of our coverage, and we’re going to keep at it,” the statement said.

Spokeswoman for the Post, Kristine Coratti Kelly confirmed that the online story’s misleading headline, which angered Trump, was quickly changed when they realized. She said the news outlet changed the headline of the story to reflect more on what Trump said, adding “We did so on our own; the Trump campaign never contacted us about it.” On social media, many journalists reacted to the ban, with some describing it as an attack on freedom of expression.

In solidarity with the Post, the comedian and television host, Seth Adam Meyers announced that he too, is banning Trump on his show. Meyers is the host of Late Night with Seth Meyers, a late-night talk show that airs on NBC.

CNN Money reports that Meyers made the announcement on his show during a segment known as ‘Closer Look’. Meyers stated “We here at ‘Late Night’ believe in freedom of the press so therefore have decided to stand in solidarity with them.” According to the Guardian, repeat offender Trump revoked news outlet credentials on several occassions. Some media outlets, including the Daily Beast, the Huffington Post, Politico and the Des Moines Register, have also seen bans by Trump, when covering his campaign.

This article (Donald Trump Gags the Media, Bans Washington Post from Covering His Campaign) is a free and open source. You have permission to republish this article under a Creative Commons license with attribution to the author and AnonHQ.com.