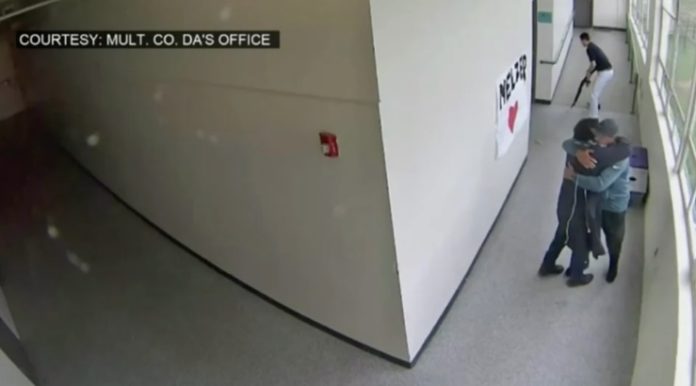 In May of this year, 18-year-old Angel Granados-Diaz brought a loaded gun to his Oregon high school. At the time, the story didn’t make national headlines because, unlike the stories of this nature that do, Granados-Diaz didn’t shoot anyone.

But now, due to a public records request by KOIN 6 in Portland, the incident is making headlines for the very reason it did not back in May.

Lowe was called to the fine arts building after at least one student reported that Granados-Diaz had been making suicidal statements. The coach was tasked with finding and bringing the teen to the school office in hopes of connecting him with the help he needed.

Of the incident Lowe said:

The door opens—I’m within arm’s length of the door, about 3 feet away from the door, and there’s a kid with a gun, a shotgun.”

Lowe said running away wasn’t an option. He analyzed the situation “in a fraction of a second.”

“I saw the look in his face, look in his eyes, looked at the gun, realized it was a real gun and then my instincts just took over.”

As seen in the newly release surveillance video, not long after arriving, Lowe had his hands on the weapon and was able to pass it to another teacher.

After handing off the gun, Lowe embraces Granados-Diaz in a hug. The student can be seen returning the embrace in the surveillance video.

Despite the chaos unfolding around them, Lowe stayed focused on the student, feeling “compassion” for the teen.

Lowe explained in May:

“I think the universe works in amazing ways,” he said. “I think I’ve gone through stuff in my life that prepared me for that moment and I’m lucky and I’m happy that I was in that classroom for those kids and I was able to prevent that tragedy. I don’t know if ‘hero’ is the right word but the universe works in mysterious ways and I was meant to be in that classroom and I was meant to stop a tragedy.”

When confronted with the test the universe presented me with, I didn't see any other choice but to act. Thank God, I passed. I've spent the last 24 hours being more appreciative of my family and realizing we have a serious problem.

According to the Oregonian, Granados-Diaz was suffering a mental health crisis the day he brought a firearm to school and intended to only hurt himself. The teen’s defense attorney, Adam Thayne, reported that the gun was loaded with only one round, with words “The last red pill 5-17-19 just for me” inscribed upon it.

As a result of his actions that day, Granados-Diaz must undergo mental health treatment as well as alcohol treatment if deemed necessary. According to investigators, the teen had been drinking the same morning he brought a gun to school.

After his release from jail, Granados-Diaz will be barred for stetting foot on Parkrose High School grounds and must not contact any students who were in the classroom that morning in May until he receives permission from is probation officer. He must also complete 64 hours of community service.

Granados-Diaz will not be permitted to own guns and will develop a “safety plan” along with his probation officer before he continues school.

A psychologist reported that Granados-Diaz showed signs of both persistent depressive disorder and social anxiety disorder but “met zero out of 10 criteria” on a test to determine his potential risk of violence to other people.

According to Thayne, Granados-Diaz is “deeply remorseful for the pain that he has caused his family, his friends and the community.”