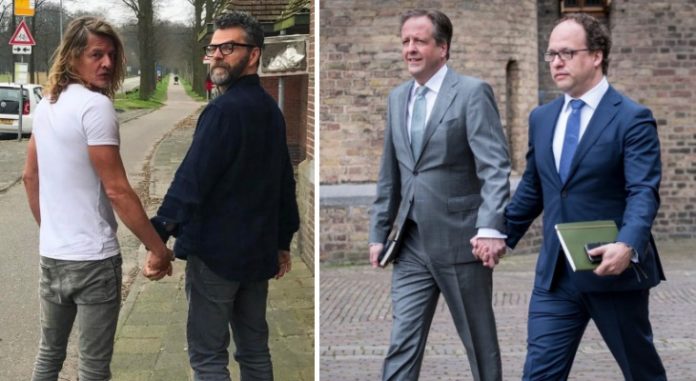 Over the weekend, a gay couple was attacked by a homophobic group. This is how men in The Netherlands are showing solidarity with the victims.

On April 1, 2017, couple Jasper Vernes-Sewratan and Ronnie Sewratan-Vernes were attacked by a group of approximately 6-8 homophobic men in The Netherlands. The reason why? The duo was holding hands.

During the ordeal, Ronnie was beaten with a pair of bolt cutters, resulting in him losing four teeth. Jasper suffered injuries to his chest, back, and legs, relays RTL Niews.

Because The Netherlands became the first country in the world to legalize gay marriage in 2001, the incident has sparked outrage worldwide – but particularly among Dutch citizens. Following on the heels of Prime Minister Mark Rutte condemning the violence, two politicians unknowingly started a trend when they held hands on their way to give talks on the formation of a new Dutch government in The Hague.

Proud of @APechtold @D66 for leading by example. We want a country where men can safely walk hand in hand #allemannenhandinhand pic.twitter.com/Srx9RGqmio

Alexander Pechtold, the leader of the liberal D66 party, jovially held hands with party colleague Wouter Koolmees to show solidarity for Jasper and Ronnie who were attacked over the weekend. Acknowledging that homophobia has no place in The Netherlands (or any country), Koolmees told reporters:

“We think it is quite normal in the Netherlands to express who you are.”

Once a photo was shared featuring the two men unabashedly holding hands, the hashtag #allemannenhandinhand began spreading like wildfire. Men from all walks of life – regardless if they are gay or straight – have uploaded pictures and included the hashtag to support Jasper and Ronnie and combat homophobia.

So far, three teenagers (ages 16 and 14) and one man, age 20, have been arrested in connection with the attack. Police are encouraging anyone with information to come forward. Next weekend, a protest is scheduled to take place in Arnhem to call for an end to anti-gay violence.

For now, delight in the many activists (below) who are “being the change” they desire to see by advocating for equal marriage and the right to love whom one pleases.

A post shared by GroenLinks Geldrop-Mierlo (@groenlinks_geldropmierlo) on Apr 3, 2017 at 11:37am PDT