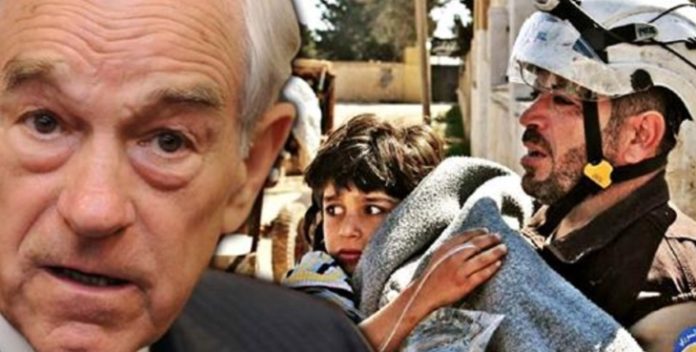 President Donald Trump has vowed to unleash the full force of the U.S. military against Syria after President Bashar al-Assad launched an attack using a toxic chemical believed to be sarin gas in Khan Sheikhoun, killing at least 86 people — including 30 children — and seriously injuring hundreds more.

Horrific images of the dead flooded social media and were put on display by U.S. Ambassador to the U.N. Nikki Haley for a meeting of the Security Council — all prompting Trump to declare the attack an “affront to humanity,” adding,

“When you kill innocent children, innocent babies, little babies … that crosses … many lines.”

Of course killing children and other innocents with chemicals crosses lines — and anyone not repulsed and outraged would do the world a favor to examine their conscience.

But did it actually happen?

Did Assad, whose forces, with the assistance of Russia, have successfully pushed back against terrorist fighters — including groups like al-Qaeda affiliates, trained and armed by the U.S. and its allies — really feel attacking his own people out of the blue would be a prudent move at this late hour in the conflict?

Would the Syrian leader virtually guarantee his own defeat — if not death — by gassing noncombatant civilians, days after the United States loosened its stance on his continued efforts to wrest the war-ravaged nation from the clutches of extremist groups?

Further, would Assad seriously relegate long-sought peace negotiations to the dustbin of diplomacy, literally the day before talks were to take place?

In fact, the heinous act would be antithetical to any agenda Assad could possibly conjure — but the slaughter of 86 innocents would, however, serve the interests of other parties.

Cui bono? Who benefits? Who, exactly, stands to gain from such a gruesome act?

Dr. Ron Paul spoke with Ron Paul Institute for Peace and Prosperity executive director Daniel McAdams for the Liberty Report on precisely why the theory Assad would abruptly kill scores of innocent Syrians is strikingly less than legitimate — and why we need to be paying attention to the exponentially more likely culprit.

As the much-beloved former presidential candidate explained, the odious propaganda smearing Assad as a monster for using chemical weapons is strongly indicative of a manufactured opportunity — a false flag.

“Before this episode of possible gas exposure and who did what, things were going along reasonably well for the conditions,” Paul noted. “Trump said let the Syrians decide who should run their country, and peace talks were making out, and Al Qaeda and ISIS were on the run.

“As you point out,” McAdams said, “we’re on the eve of peace talks — literally on the eve of peace talks — Assad has the upper hand in these talks; he’s almost … with his Russian and Iranian allies wiped al-Qaeda and ISIS out of the country. So, on the verge of this great victory that they’ve suffered [to ensure] for all these years, he decides, ‘I think I’m going to go out and kill some people with gas.’”

He added, “And if you just wanted to kill people, there are a heck of a lot better ways of doing it than using gas — which just guarantees that the entire world community, including allies, are going to turn against you. And as you say,” McAdams noted, addressing Paul, “you would have to be the most insane leader, probably in the history of the world” to carry out such a horrendously timed and ill-fated attack.

“The neocons and the Deep State,” Paul replied, “they’re making the plans, they rule the day — but they still know that they have to use their propaganda machine to get the people behind them. And I think that is what’s going on.

“They did that in Iraq successfully because people believed Saddam Hussein was a monster.”

Paul noted the Big Iraq Lie — that Hussein had accumulated Weapons of Mass Destruction to use against his own people — has been unfortunately long forgotten by the U.S. populace, or they would see the similarities in the Syrian chemical attack propaganda.

Because of this deficit in memory, Paul continued, “the people allow the Congress to keep spending all this money, you know, to ‘remake’ the Middle East — [but the situation] keeps getting worse. But … hopefully, we can make inroads with public perception of this,” because this mass gassing, as explained by Western officials and their corporate media mouthpieces, “makes no sense, whatsoever.”

Paul isn’t the only reputable figure speaking out against the now-established U.S. narrative concerning the Syrian chemical assault.

In fact, former British Ambassador to Syria Peter Ford described those calling for active repercussions against Syria as “dogs returning to their own vomit.”

“Who benefits?” Ford rhetorically asked. “Not the Syrian regime or the Russians who are benefitting. And I believe it’s highly unlikely that either were behind what’s happened.”

However, Ford explained, “there are different possibilities.”

“One,” he continued, “is that all of it is fake news. The images, videos, the information, all come from opposition sources and not from any credible independent journalists.

“It’s also possible that the pictures show the aftermath of a bombing attack that happened to hit a jihadi chemical munitions dump. We know for a fact the jihadis were storing chemical weapons in schools in eastern Aleppo, because these were seen later by Western journalists.”

Ford, like Paul, harkened back to the lies told about Iraq to engender support for the U.S. invasion that was, in every sense of the word, illegal.

American interests in and actions pertaining to Iraq and Syria — particularly the recklessly false propaganda against leaders of both nations — have been uncannily parallel.

In August 2013, an eerily similar massive chemical attack took place in Ghouta, Syria — also the handiwork of Assad, according to United States’ agitprop.

But Texas-sized holes in that claim soon unraveled the given narrative, and the Ghouta ‘attack’ quickly faded from memory much as Hussein’s WMDs did years earlier — making the refutation of what took place in northern Syria this week a Herculean task, as Paul pointed out.

“It was never proven in fact,” McAdams affirmed. “U.N. official Carla Del Ponte said it was most likely done by the rebels.”

“It makes no sense, even if you were totally separate from this and take no sides of this and you were just an analyst, it doesn’t make sense for Assad under these conditions to all of the sudden use poison gasses. I think it’s zero chance that he would have done this deliberately.”

It was Dr. Paul, himself, who — in anticipation of the incoming Trump administration’s designs on foreign policy — warned in November of the potential for a crisis manufactured by the West or foreign entities to snap the United States back into full-scale, vengeful war in the Middle East.

“All we need is a false flag and an accident and everybody will be for teaching them a lesson,” Paul told the Daily Caller’s, Alex Pfeiffer. “You know the deep state is very very powerful and they have a lot of control.

“I think there’s the shadow government, the military-industrial complex, the CIA, and all the things that can be done because they just melt away and they do exactly what the establishment says.”

For the time being, it appears the establishment needs you to believe Assad is a monster who would attack the very people he has struggled to protect from terrorists moderate or otherwise.

Posturing has already begun, in fact — seemingly on schedule, considering the warnings from Dr. Paul and Ford — as Haley strongly suggested the U.S. would act soon to deliver a knockout blow to the purportedly malicious Assad regime, as she admonished the Security Council,

“When the United Nations consistently fails in its duty to act collectively, there are times in the life of states that we are compelled to take our own action.”

And, after all, it is control of the geostrategic nation and its natural resources — not some moralistic or ethical fight against terrorism — that has the U.S. scrambling and desperate to depose Assad.

Because — with the Syrian war winding down, and tepid victory in Assad’s sights — there would be no other way than an atrocity of horrific proportions to garner support for further military action by the United States in the fraught conflict.